Abstract:
Reported studies of the swimming start vary considerably with regard to the types of start and the number and definitions of start components under consideration. There appears to be no published reports on the effect of start technique on start time to 15m, which is the limit of underwater travel following the start (Federation Internationale de Natation, Rule SW 5.3). The purpose of this study was to compare start time to 15m and components of start time (block time, flight time, glide time) using the grab start and rear weighted track start (RWT) with groups of six female and eight male elite swimmers, aged 16-19 years. Each swimmer performed two trials of each type of start under race conditions. All trials were recorded on two video cameras operating at 25 Hz. Camera 1 recorded the start of each trial and was then panned to record the subject at the 15 m mark. Camera 2 was static with its optical axis horizontal, and the recording was used to measure block time and flight time. Block, flight and glide times were measured directly by frame count using the Quintic video motion analysis system (Quintic Consultancy, Coventry). There was no significant difference (P<0.05) in block, flight, glide or start times between the two start techniques for males or females. However, flight time was significantly shorter in females and glide time and start time were significantly longer in females. Glide time was highly correlated with start time and future research should investigate the effect of gender on flight time and glide time. 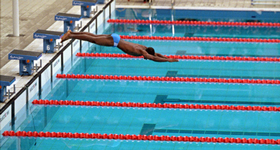 Nicholas | Quintic Sports
WE USE COOKIES TO ENSURE THAT WE GIVE YOU THE BEST EXPERIENCE ON OUR WEBSITE. IF YOU CONTINUE TO USE THIS SITE YOU ACCEPT THE USE OF COOKIES.OKPRIVACY POLICY