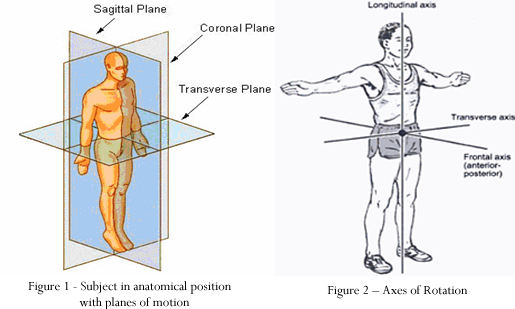 Note: All movements being described assume the body begins from the anatomical position unless stated otherwise as described in the introduction.

Flexion is a bending movement that results in the decrease of the angle in a joint by bringing bones closer together. It usually occurs in the sagittal plane. The table below represents some of the joints where flexion can occur and an example of that motion;

Figure 3 below demonstrates flexion of the wrist joint. Flexion of the wrist joint is an important movement in many sport skills especially racquet sports as it can provide stability and power to a performance. In the follow through phase of a basketball free-throw wrist flexion is evident. The purpose of this movement which is technically known as a wrist snap (demonstrated in Figure 4 below) is to generate enhanced spin on the ball which will in turn add lift to the trajectory (flight of the ball), this can increase release velocity of the ball and improve the overall performance making it an important aspect to the execution of a basketball free-throw.

This is a straightening movement that results in the increase of the angle in a joint by moving bones further apart. This movement occurs in the sagittal plane and is the reverse movement to flexion. The table below represents joints of the body that extension can occur in and an example;

This is a lateral movement away from the midline of the trunk and it occurs in the frontal plane. The table below demonstrates the joints in the body where abduction can occur along with an example;

Abduction at the hip joint is shown in Figure 7 below. Some cricket bowlers demonstrate hip abduction during a fast bowl as illustrated in Figure 8 below. In order to produce high ball release speeds, fast bowlers require high joint torques. High joint torques can be created through counter rotation which is rotation of the upper trunk away from the direction that the ball is to be thrown. By abducting the hip joint as well as other movements counter action can be created which will increase the joint torques and subsequently increase the release speed of the ball. Also from the position shown in Figure 7 below the hip abduction creates a greater distance for trunk rotation to occur over which allows more momentum and power to be created. 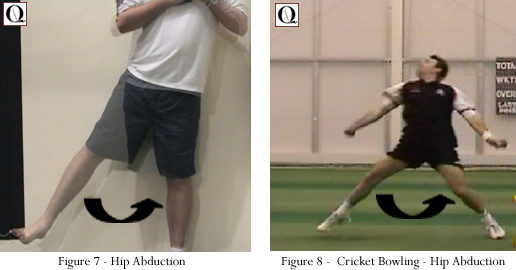 This is a movement medially toward the midline of the trunk and it occurs in the frontal plane. The table below illustrates the joints where adduction can be performed with examples for each joint;

Figure 9 illustrates the shoulder joint performing adduction. Shoulder adduction is a key movement in the performance of a golf swing and is illustrated in Figure 10 below. During a golf swing the body segments work together in a coordinated sequence to maximize club head speed at ball impact. The lead arm accelerates into maximum adduction during the backswing which allows the golfer to attain a suitable position for the upcoming downswing and hence increases efficiency of the overall skill.

This is a rotary movement around the longitudinal axis of a bone away from the midline of the body. This movement occurs in the transverse plane and is also known as rotation laterally, outward rotation and lateral rotation. The joints in which external rotation can occur are shown in the table below;

Figure 11 below demonstrates external rotation of the shoulder joint. A sporting example where external rotation is evident is during the tennis serve, this is illustrated in Figure 12 below. During the wind up of the tennis serve the shoulder joint performs external rotation in order to store elastic potential energy which can be transferred into the forward motion of the serve which will generate a tremendous amount of force and momentum. Also external rotation allows the racquet to go further down, this is important because it will firstly allow more strain energy to be formed and secondly increase the acceleration time of the racquet during the forward phase allowing increased time for the transfer of energy. 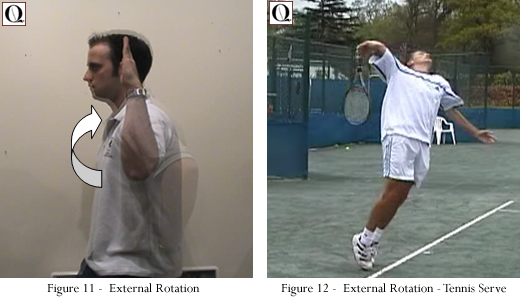 This is a rotary movement around the longitudinal axis of a bone toward the midline of the body. It occurs in the transverse plane and is also known as rotation medially and inward rotation. The joints of the body where internal rotation can occur are listed in the table below as well as an example for each joint;

Anatomical Movements Sports Science Degree Physical Education | Quintic Sports
WE USE COOKIES TO ENSURE THAT WE GIVE YOU THE BEST EXPERIENCE ON OUR WEBSITE. IF YOU CONTINUE TO USE THIS SITE YOU ACCEPT THE USE OF COOKIES.OKPRIVACY POLICY