Impulse is a measure of what is required to change the motion of an object and is a product of the force applied and the time over which this force is applied.

Impulse-momentum relationship : this relationship relates the momentum of an object to a force and the time over which the force acts.
Impulse = change in momentum.

The video has been digitised and calibrated and still images have been captured from the video to show the stages of the sprint start in detail. The data has been exported into excel and force, momentum and impulse have been calculated (see spreadsheet provided).

The results demonstrate that the front foot produces a higher velocity, acceleration, and therefore momentum than the rear foot and consequently the impulse produced by the front foot is also greater. This increase in acceleration from back to front (following the athlete’s centre of mass (COM)) helps to propel the sprinter away from the blocks. Notice that (bold in the table):

As the impulse produced by the athlete is closely related to the velocity and acceleration with which the athlete leaves the block a large impulse is necessary for greater acceleration from the block. Maximum impulse would therefore be obtained by producing a maximal force for a long period of time, therefore obtaining maximal speed from the blocks. However, in a sprint start the reaction time is a major variable in the start efficiency. Thus, in order to remain on the blocks for only a short time the greatest force possible needs to be produced. Performance therefore is determined by the ability of the athlete to generate maximal forces quickly and achieve the optimal impulse output. Forces produced by the feet are illustrated in the graph below: 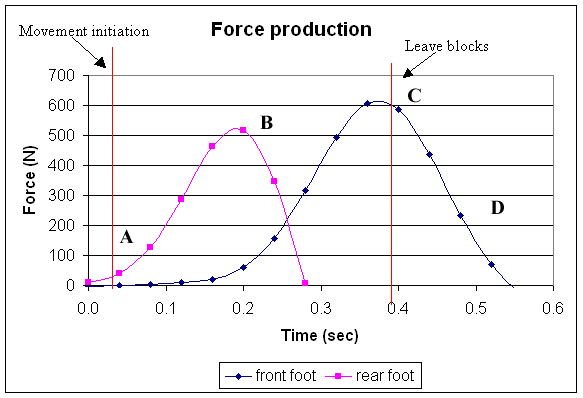 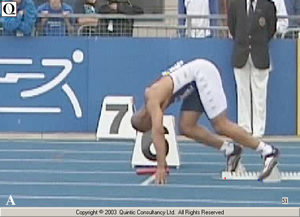 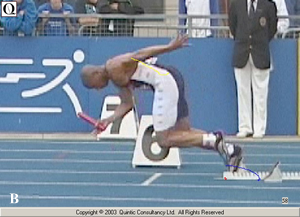 Coaches working on improving the sprint start can measure impulse using this method and use training principles and programmes to improve the athlete’s rate of force development, thus increasing their impulse from the block. This will improve their overall performance in the event. Each of the variables in the table above can be analysed and improved, aiming to achieve the optimal impulse for the athlete.

Teachers may use this method of calculating performance kinetics to engage students’ interest whilst applying sporting situations to this area of the syllabus. This study can be adapted to compare different athletes or by manipulating the calculations (allowing for different levels of study) to apply this idea to the lesson.

Impulse | Quintic Sports
WE USE COOKIES TO ENSURE THAT WE GIVE YOU THE BEST EXPERIENCE ON OUR WEBSITE. IF YOU CONTINUE TO USE THIS SITE YOU ACCEPT THE USE OF COOKIES.OKPRIVACY POLICY