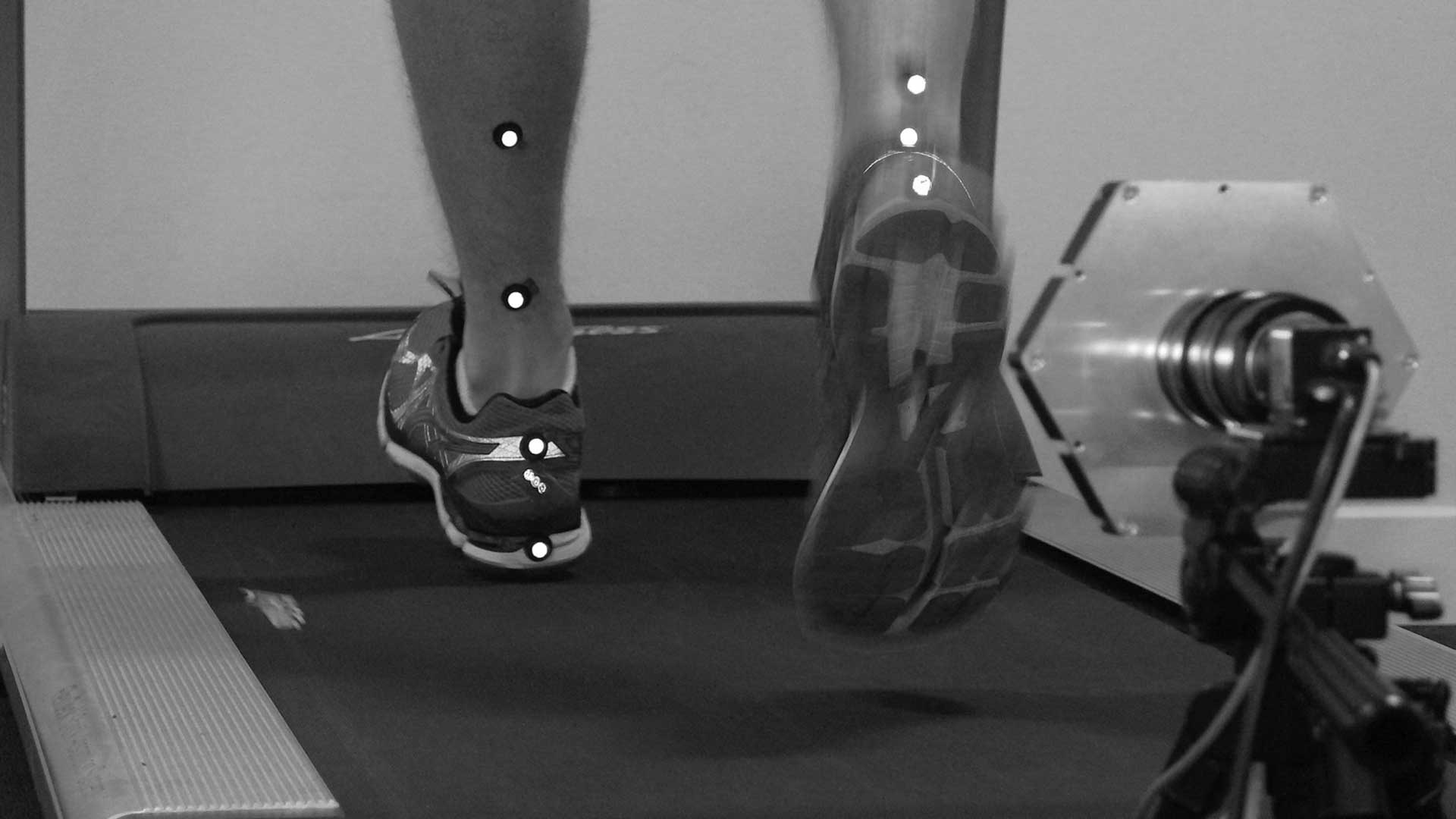 Introduction:
Mohammed Hafeez  (MH) was reported for a suspected action after the third ODI against Sri Lanka in Abu Dhabi in October 2017 and underwent his ICC Independent Assessment in Loughborough (November 2017).  The results highlight on average an 18.5˚ elbow extension ‘over the wicket’ (OTW) and 15.2˚ elbow extension ‘around the wicket’ (ATW).  Three of the 24 deliveries analysed reported elbow extension below the permitted 15˚ extension. The highest record value was 22˚ elbow extension. In order to return to International Cricket, the key objective is to enable MH to bowl within the ICC tolerance of 15˚ extension. A second objective is for MH to continue to be effective in his bowling and remain the world’s top-ranked ODI all-rounder. 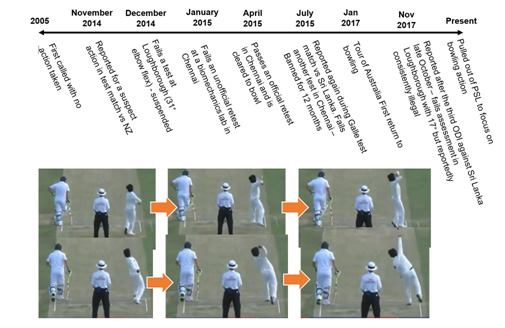 First Stage:
Prior to his visit to the UK it was important that we understood MH’s typical bowling action; this included looking at whether his action had changed over time due to previous ICC action reviews. Footage from multiple matches was reviewed, aiming to identify MH’s bowling tendencies, focusing on his body position and how the position which he took up could result in compensation with flexion at the elbow. A key question to answer and explain related to the Elbow Angle at Upper Arm Horizontal   (Loughborough – Nov 17) – Average 23˚ Maximum 24˚. This is very different to the ICC Independent Assessment (Brisbane – Nov 16) – Average 5˚ with a maximum Elbow Angle at Upper Arm  Horizontal of 9˚. Why the difference?  This was a key area to review and understand why the changes. 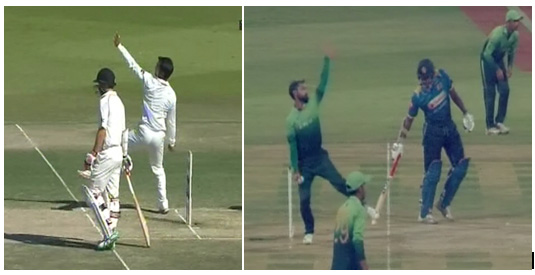 Once Hafeez arrived at the Quintic office, our findings from match footage review and the ICC report were discussed in detail. Our biomechanical observations and recommendations were discussed with Hafeez, Carl Crowe and Azhar Mahmood. This included talking through why Hafeez has the tendency to produce flexion at the elbow. Also discussed were the changes that could be made at a whole body level to reduce the need for this elbow flexion, this progressed into the plan of action. Some of the adjustments could be made over the course of a few days, whereas others needed to be drilled and continuously worked on over the following few months, with successful completion this would then result in a desirable and legal bowling action. The biomechanical changes involved feet positioning, hip rotation and torso alignment with the aim to reducing the need for flexion / extension movement at the elbow. 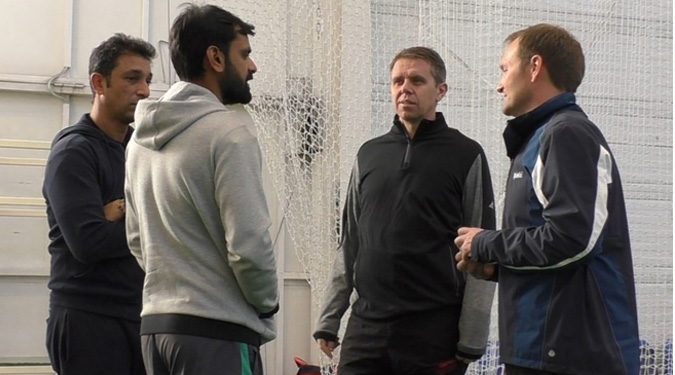 Whilst MH began going through the drills in the UK, all movements were recorded using Quintic high speed cameras so that the footage could be quickly reviewed. This allowed MH (and the coaching team) to gain a better understanding of how his body was moving during the bowling action. After each drill was complete, the video footage was reviewed, with improvements and weaknesses being identified and discussed; what is causing this weakness and how can it be worked on. A large number of drills were completed during this time as we progressed from functional movements to more game and action specific training. Video footage was continuously reviewed with areas of weakness identified, discussed and worked on in a progressive manner. Some of these drills were categorised as ongoing and would have to be worked on by Hafeez over the following months, if a permanent change in action were to result. 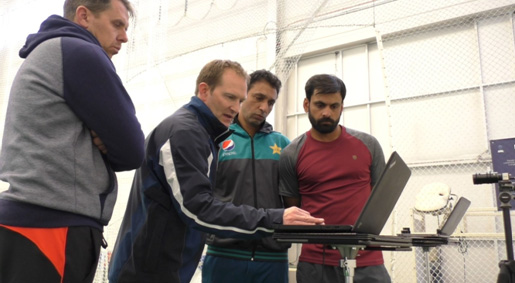 Three high-speed Quintic cameras were set up along with 3D reflective body markers used to asses MH bowling action. The analysis was completed shortly after completing all the drills and technical changes were fresh in MH mind. Match style bowling was performed, along with one step and two step run ups. All footage could also be reviewed by MH after each delivery and alterations could be made between each delivery if required. Many deliveries were completed and analysed using this set up. After the completion of data collection, we proceeded to create a 3D report, indicating where the legality of his action. This gave MH something clear to work on, as he prepared for his ICC assessment in Loughborough. 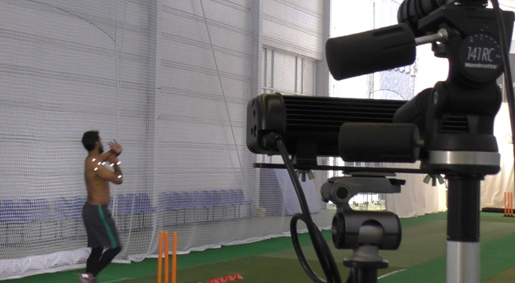 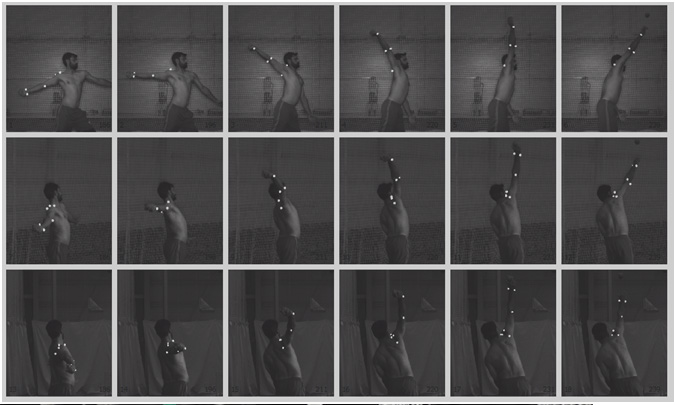 During the months after the work at Edgbaston, constant work by the team, (Carl, Azhar and Dr Paul Hurrion) was necessary to ensure the technical changes required were adhered too. It was imperative the bowling action became natural, flowed and second nature to MH. Videos, email, phone conversations ensured the team where all keep up to date and most importantly MH was completing his drills effectively and gaining confidence.

Only when the team were happy with MH bowling action, was he recommended to go for the ICC re-assessment. The aim now following the success outcome of the ICC test, is to ensure the MH is never called again for a suspect action, with the aim to make him an even more effective ODI spin bowler at International level.

“I must say that Dr. Hurrion has been very helpful and co-operative in terms of biomechanical advice on my bowling action. He explained the mechanics of my action and how I needed to change in order to become legal and yet still ‘match effective’, I very much enjoyed working with Quintic & Paul…

I was prescribed physical exercises to build the strength in my shoulder muscles. To utilise the larger muscles (and thus reduce the stress on the elbow joint) energy that comes through my body / shoulder when I deliver the ball must be developed from my lower body first. I adopted an approach used by javelin throwers, where the athlete transfer energy from the ground up, legs, torso, shoulder, wrist and finally into the cricket ball. As a result of this consultation, my action has been modied so that all the strength and speed now come from the bowling shoulder and not the elbow. The purpose was simple, to reduce the dependency on my elbow during the bowling action.” 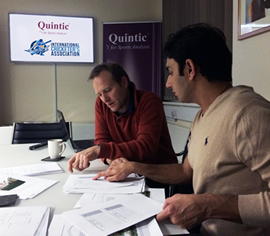 “Quintic is a fantastic resource for Warwickshire County Cricket Club. Having access to six high-speed synchronised cameras allows us to comprehensively analyse and monitor a range of biomechanical and technical factors for batting, bowling and fielding. Quintic is an easy to use system that helps to identify and measure any issues relating to injury prevention and performance.Our bowling coach Alan Richardson has already been a big user of the system, testing and profiling all of the clubs’ bowlers. “Quintic has already been an essential tool towards gaining a better understanding of the mechanics of all of our bowlers and their bowling actions“. The club has further plans to use Quintic within the sports science and medicine department to enhance both physical performance, through the assessment of Olympic lifting techniques, and to provide vital information on injured players in a bid to reduce and minimise injuries and optimise the rehabilitation process.

Quintic will also be extensively used within the academy and emerging players programmes to help educate our young players on both technical and biomechanical factors that could enhance performance.” 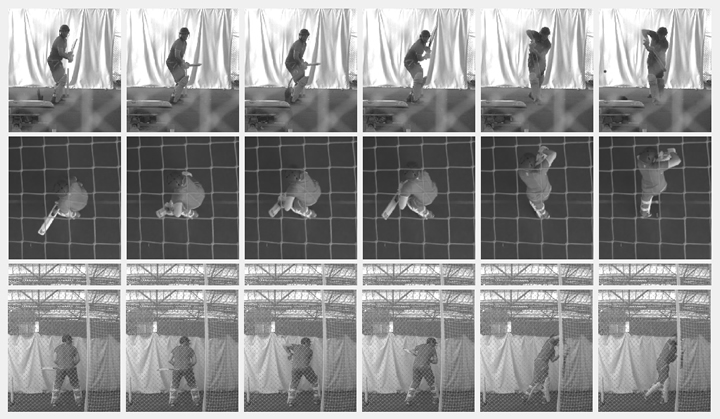 Cricket | Quintic Sports
WE USE COOKIES TO ENSURE THAT WE GIVE YOU THE BEST EXPERIENCE ON OUR WEBSITE. IF YOU CONTINUE TO USE THIS SITE YOU ACCEPT THE USE OF COOKIES.OKPRIVACY POLICY