The Effect of Shoe Type on
Long Distance Running Gait

This case study is an in-depth athlete specific analysis of running gait, using only one Quintic High-Speed USB3 Camera. It is specifically focused on the athletes Left Leg vs Right Leg kinematic similarity as well as the influence of different style running shoes on their gait.

The comparison between barefoot and shod running is an area which has been frequently explored in the literature (Hall et al., 2013). However this comparison involves the two extremes, whereas comparing a cushioned trainer and a minimally cushioned trainer is a much more common consumer decision. It is typical for runners to do the majority of their training mileage in their more cushioned shoe, leaving their minimally cushioned, “faster” shoe for races and race pace workouts. “Racing flats” have been found to inflict a significantly greater peak pressure, maximum force and contact area in comparison to a more cushioned “training shoe” (Wiegerinck et al. 2009).

By doing the bulk of your mileage with a more cushioned training shoe, it is believed that this will limit the level of loading. Despite this, the evidence suggesting shoes with more cushioning reduce the frequency of running related injuries is limited (Theisen et al. 2016). It must also be considered that if shoe type is altering an athlete’s gait, by doing the majority of their training with a different gait to that in a race, are they limiting their performance?

All data was collected on a single amateur runner with a forefoot/midfoot strike running style. The participant’s injury history within the 12 months prior to the study included ankle sprains due to under pronation and a period of shin splints (Tibial Stress Syndrome).

The cushioned shoe that was used within this study was the Nike Lunarstelos (Appendix A). It is a road running shoe with a neutral arch support, intended for daily road running. By present standards a medium weight shoe at 264 grams, this shoe has a relatively large heel to toe drop of 10mm and therefore carries some additional weight in the heel cushioning. For a forefoot/midfoot striking runner this adds unnecessary excess weight and could also be influencing the participant’s gait.

The racing flat shoe that was used within this study was the Nike Streak LT 3 (Appendix B). It is also a road running shoe with a neutral arch support but is intended for competition use. It is a light shoe at only 150 grams, the majority of this weight difference is down to its minimal outsole cushioning with a heel to toe drop of only 4mm.

Retroreflective 2D markers were placed on the Lateral Hip, Knee, Ankle, 5thMetatarsal and Toe, for both the Right and Left Leg, as shown in Figure 1. The Quintic High Speed 1.3 MP Camera with an 8 – 48 mm zoom lens was set up 17 metres perpendicular to the running lane. All videos were recorded at 250 frames per second with an image size of 1280×650. All the data was collected during one session and the same camera placement was used for all recorded videos, as shown in Figure 1. 10 videos for left view and 10 videos for right view were recorded for each shoe type. The participant was advised to run at 10km race pace and the repetition length was self-selected by the participant. 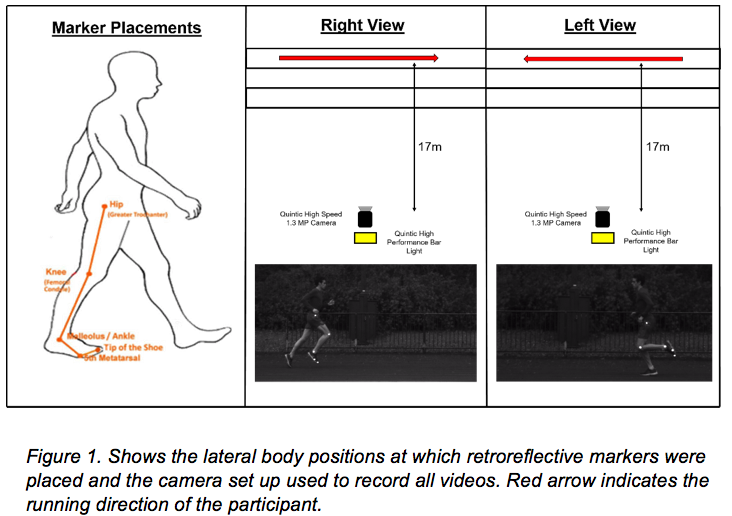 All videos were calibrated using both vertical and horizontal measures, all videos were digitised by the Intelligent Tracking Function within Quintic Biomechanics v31. The videos where digitised from 10 frames before Left/Right Foot contact to 10 frames after the next Left/Right Foot contact. An independent Quintic Similarity measure, which uses the range of the two curves and the average Y-axis difference between them to quantify the similarity.

In order to minimise the influence of running speed on gait kinematics, only the 5 videos closest to the average running speed were selected, as shown in Table 1.

Table 1. The 5 average horizontal Hip velocities, in each condition, closest to the overall average of 5.10 m/s

The first output that was shown in the Quintic Automatic Gait Report is an overview of the ‘Stride Characteristics’, a summary of the stride characteristics from the two reports are shown in Table 2. There was very little variation in these measures with the largest deviations being seen in the stride length, with bigger differences between Left and Right compared with the two trainer types.

Table 2. Comparing the Stride characteristics between the two trainer types for both Left and Right Leg.

Table 2. Comparing the Stride characteristics between the two trainer types for both Left and Right Leg.

The Similarity ratings between Left and Right Leg are displayed in Figure 5 through to Figure 10. The first stand out result seen from these graphs is that the level of similarity between the Left and Right Leg is very consistent between the two shoe types, within 1% of each other at the Hip, Knee and Ankle, using the Quintic Similarity measure. The second clear result is that the Left vs Right Leg Ankle angle similarity is lower than that seen with the Hip and Knee angle. Reinforcing this quantitative measure, visually the Ankle angle curves seem a lot less coherent than those seen at the Hip and Knee.

As the Similarity measures have shown the shoe type appeared to have very little impact on the Left to Right Leg Similarity. The Left and Right Leg data was then combined to produce an overall average, allowing direct comparison of the Hip, Knee and Ankle angle between the two shoes.

Figures 11, 12 and 13 compare the Average Hip, Knee and Ankle angles between the two shoes respectively. As shown by the overlapping 95% confidence intervals, shoe type had very little influence on leg kinematics. Quintic Similarity scores are also shown on the graphs, with all three angles ranking very highly when comparing the average curve of each shoe type.

Despite shoe type not effecting gait kinematics within this study, it does not mean the two shoe types are equal in terms of performance, as although gait kinematics did not change at the tested running speed it gives no indication as to the energy requirements to run at that speed in the given shoe type. With the lighter and more propulsive racing flat almost certainly increasing running efficiency.

The Effect of Shoe Type on Long Distance Running Gait | Quintic Sports
WE USE COOKIES TO ENSURE THAT WE GIVE YOU THE BEST EXPERIENCE ON OUR WEBSITE. IF YOU CONTINUE TO USE THIS SITE YOU ACCEPT THE USE OF COOKIES.OKPRIVACY POLICY