The Quintic Automatic Putting Report has been developed in order to produce detailed analysis of a golfer’s putting technique in an applied setting.

Number of Cameras: A single high-speed camera is required to capture the putting action from the ‘face-on’ view.  It is strongly recommended that a fixed camera set-up is used to ensure consistent and accurate data collection.

Number of Trials: You can produce a report for up to 6 putts/trials, with a separate file uploaded for each putt. The ability to input multiple trials means that you can determine the variability of the putting action, with less variability indicating greater consistency in the player’s stroke.

Anatomical Marking: To generate a complete report, reflective markers need to be positioned on the following anatomical landmarks.

9.5 mm markers are recommended for all anatomical markers.

One high-speed camera is used to capture the movement with reflective markers placed in the appropriate anatomical positions, as explained in the associated tutorial. Each video/trial is then digitised in the Quintic Biomechanics software and the data exported to Excel. Once this process is complete, the PDF report can be created using the relevant bolt-on Quintic Automatic Report software. Basic information to be included in the report (e.g. name and height) is to be entered manually and a profile created for that individual.

The relevant Excel files are then loaded into the report software and the PDF report is automatically generated, including the calculation of key time events and variables. This means that time does not need to be spent calculating the key variables and attempting to determine where the key frames are in the video.

The Quintic Automatic Putting Report includes graphs, diagrams and statistics for 32 parameters. They include the following:

For consistency, minimal movement 0.5cm is required in both directions (Sway & Lift). 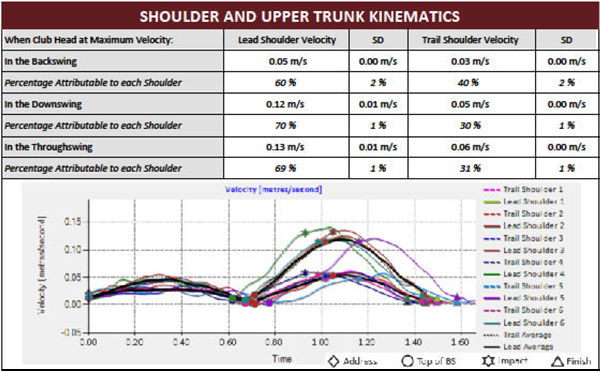 Putting | Quintic Sports
WE USE COOKIES TO ENSURE THAT WE GIVE YOU THE BEST EXPERIENCE ON OUR WEBSITE. IF YOU CONTINUE TO USE THIS SITE YOU ACCEPT THE USE OF COOKIES.OKPRIVACY POLICY