Q4E Case Study 41 – Every player can be FASTER, but not everyone can be FAST…

It’s no secret that acceleration capabilities and maximal sprint speed are very desirable locomotive movement qualities for the modern soccer player. Although actual exposure to 100% maximal speeds maybe limited or rare during typical competitive match play, the essence and ability of changing velocity – accelerating, decelerating and change of direction are all of considerable importance to the modern player.

Some really interesting work in this area by Barnes et al 2014, in a 7 year league wide comparative study, identified and highlighted the physical and technical evolution of the modern EPL game had increased by 35% from the 2006 to 2013 seasons. For this reason the EPL is now universally considered to be the most physically and technically demanding professional domestic soccer league worldwide.

So the need for speed in all its facets is coveted. With the considerable growth of support team members (across a variety of sport science disciplines) at most professional soccer clubs, the desire to improve player’s physical capabilities, reduce the incidence of potential injury and to maximise player availability for game time is of paramount importance to all concerned.

Typical daily performance conversations will centre on what a players has done, what they need to do in the future, with the outcome of a specific plan to target these potential performance gains. Collective inputs will come from a range of sources, across different disciplines. Soccer like most sports is not immune from subjective opinion – which when combined with robust objectivity can be extremely productive but isolated subjective comments will always remain that certain players are not fit, always injured, will never run fast or are just slow which can be restrictive to overall development and progression.

The following case study with two EPL professional soccer players was used to provide objective information regarding the biomechanical strategies each player used to accelerate maximally in a linear direction to 10m. The context of this specific intervention is important. Both players were highlighted from multiple sources within the club (technical coaches / backroom support staff / player) that additional analysis was required to fully understand in greater detail as to why the characteristics of ‘speed’ were not optimal when compared to other members of the group.

The main purpose of this applied case study was to provide objective data on the specific movement strategy that a player utilises in order to accelerate from 0 to 10m. The aim was to inform physical preparation and coaching staff with key biomechanical insight that would inform future training interventions. The fundamental concept being a more individualised measurement, to tailor the inputs to the specific requirements of the individual player and not the more traditional generic one size fits all approach.

The Quintic Biomechanical analysis system (v29) uses multiple synchronised high speed cameras to measure a variety of kinematic and spatio-temporal factors that were specifically related to how the player performed the task. Using the Quintic system, the first 8 ground contacts were measured and analysed with specific data provided on ground contact time, flight time, step length, step frequency and how these all contributed to the overall velocity profiles. Additionally a photo sequence was produced that identified key events from the task, notably each initial ground contact and toe off for each step. These were then used in conjunction with the objective data in order to ‘tell the story’ of why, what and how the player executed the acceleration task (figure 3).

White tape was placed on the grass surface, either side of the point of action, at 1m intervals up to 10m, to assist with the calibration process involved in assessing step lengths. The high speed cameras were fixed on tripods, operating at 250fps perpendicular to the area of linear acceleration.

The main aim was to provide the player and other support members with the players unique movement fingerprint for the acceleration task. So rather than focus on actual maximal speed at a key distance (10m), we were able to identify how the player achieved this, what was their movement strategy and then more importantly what was required from the wider support group to influence this profile to make the player more efficient and ultimately go faster!

Players were instructed to accelerate as hard and as fast as they could from an upright standing position to 10m. Each player performed 5 maximal efforts with sufficient recovery as directed by the conditioning staff at the session. Each effort was recorded using 3 high speed cameras, positioned perpendicular on the sagittal plane. Additionally, instantaneous velocity was recorded with the Laveg laser system (LDM 300C) and speeds were recorded at 3, 5 and 10m for comparison. 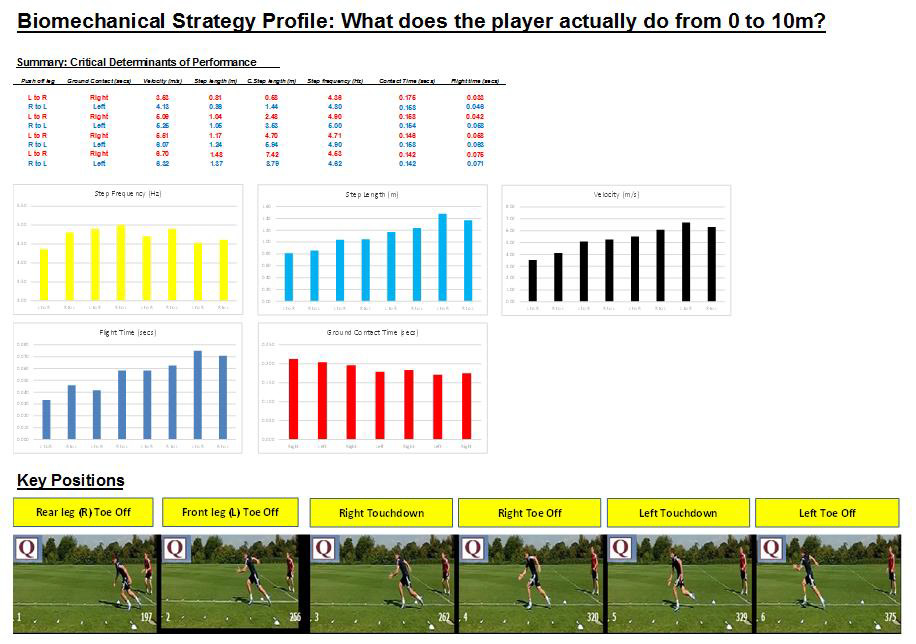 Figure 3 provides an overall biomechanical summary template of the key objective metrics of ground time (secs), flight time (secs), step length (m) and step frequency (Hz) profiles for the first 7 steps. The ability to combine these with photo sequences, at key events, allows for the objective numbers to have specific context in relation to the key positons that the player attained. 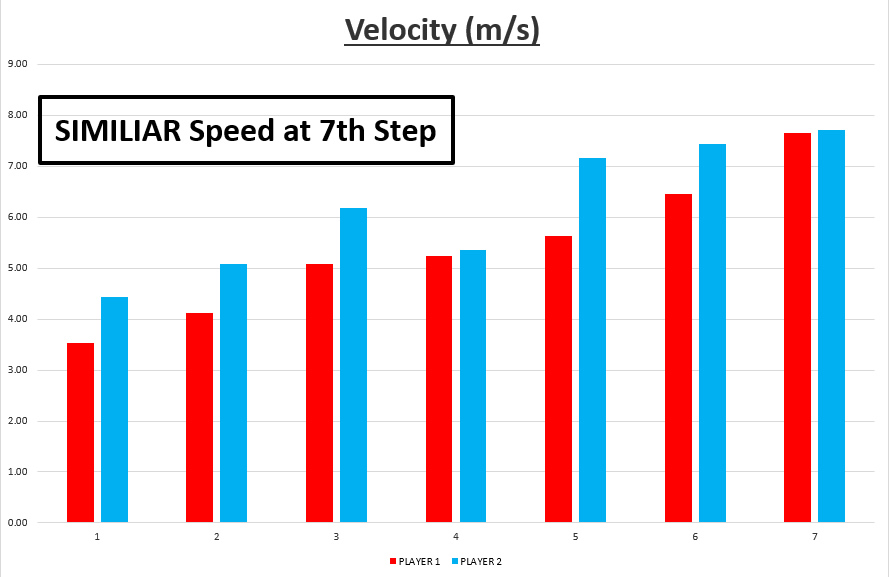 Figure 4 observed very similar absolute speed values at the 7th step for both players. But when these profiles were observed on a step by step basis we can clearly observe very different profiles across the key metrics from the two players. So the individualised strategy on how these similar performances were produced is of huge importance. 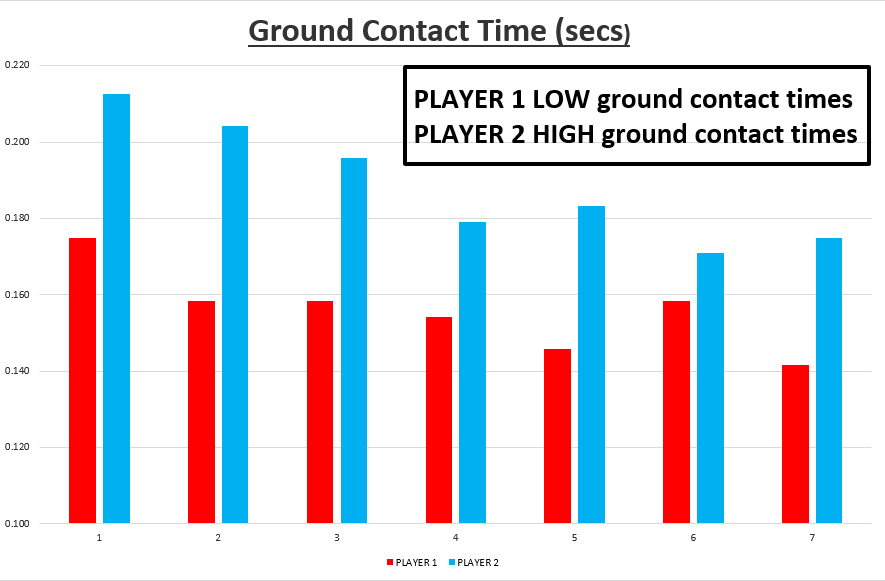 Figures 5 and 6 show the obvious difference in ground contact times and step length profiles between the two players. Player 1 demonstrated relatively small ground contact times but with shorter step lengths, whilst Player 2 showed an almost opposite profile of longer ground times but
with longer step lengths. But importantly at the 7th step both were of similar speed. This highlights the absolute importance of having a clear objective profile, to which performance conversations can be shaped and informed, to promote an overall common sense and logical approach around how to make each player faster. 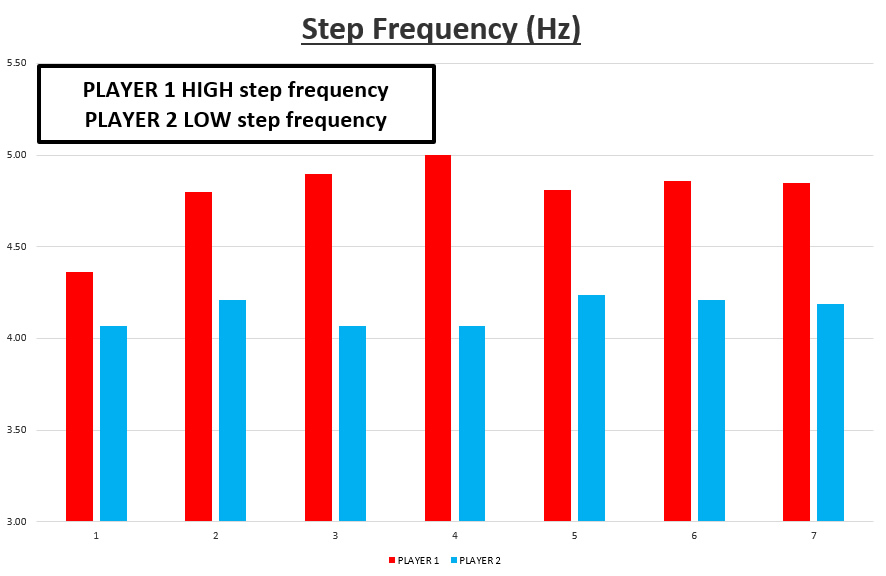 The results of these two case studies revealed key insights that may not have been apparent from simple observation of watching either player’s performance of the task, whether in real time or via video review. The objective data has shown a further level of required detail and highlighted that there is more than one way to achieve a specific velocity outcome, which in these examples were very similar at 7th step.

Player 1 exhibits an exceptional step frequency of over 5Hz after step 4. Comparative reference data on elite sprinters would indicate values close to or in excess of 5Hz for step frequency are exceptional and rarely observed competitively. So for player 1 to increase acceleration qualities, the only sensible approach has to be to build the players ability to increase step length. Any notion that focuses on the concept of aiming to further improve step frequency would have little to zero impact on their overall performance, as this player is currently at the outer limits of what is humanly possible for this specific metric. This insight cannot be observed or understood from the video or the naked eye alone. The key take home message is that neither profile is necessarily right or wrong. The key question should be: what is ‘relevant’ for each player in order to enhance and improve performance to make them faster!

From a coaching perspective a player’s ability to accelerate maximally will always be dictated by the ability to apply the right forces, in the right direction and in the right time frames. The interaction of kinematics and subsequent kinetics is crucial to understand the cause and effect relationships and the consequence each strategy has on the players perceived movement efficiency. Without this level of granular detail, the interventions could be at best, misguided and at worst, prove to be very ineffective and time inefficient. Neither are scenarios that any support structure would want to facilitate. External expertise from other sporting domains, with the use of specific technical sprint coaches and the utilisation of an applied Biomechanist are slowly being embraced more frequently within soccer supporting structures but still remain rare when compared to other traditional sports such as track and field. The ability to shape and guide performance conversations with quickly generated biomechanical reports, with key metrics essential for acceleration performance should be an integral part of the coaching process when making any technical changes.

Every player can be FASTER, but not everyone can be FAST… | Quintic Sports
WE USE COOKIES TO ENSURE THAT WE GIVE YOU THE BEST EXPERIENCE ON OUR WEBSITE. IF YOU CONTINUE TO USE THIS SITE YOU ACCEPT THE USE OF COOKIES.OKPRIVACY POLICY