The aim of this study is to look at the effect of three unstable shoes on gait kinematics during the stance phase of walking.

Figure 2 shows the average linear velocity of the four joints during the stance phase.  Hip velocity is relatively constant throughout with a range of 0.91m/s whereas the other 3 joints display a far greater range of velocities starting around 1.30m/s then dropping to below 0.50m/s before increasing to over 2.00 m/s.  Knee, ankle and MTP velocity all follow a very similar pattern: sharp decrease after heel strike, then a period of low constant velocity before a rapid and sustained increase in velocity up to toe off.  The hip joint also follows this pattern but with far less severe changes in velocity.

Figure 2: Overall mean velocities during the stance phase of the gait cycle

Figures 3, 4, 5 & 6 show that the barefoot condition resulted in the lowest linear joint velocities at all four joints but otherwise there is very little variation in linear velocity between the different shoes. Figure 8: Mean knee angles for a subject at six points during the stance phase. 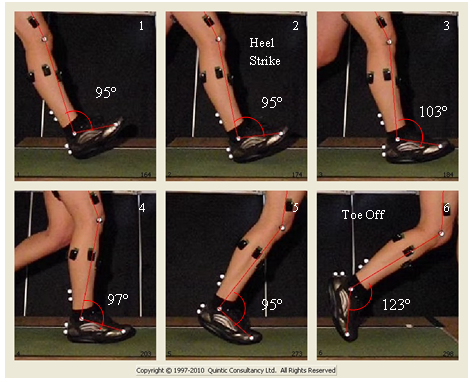 The results from this study would indicate that there is a difference in linear velocity between walking barefoot and with shoes on.  This is probably because the shoes provide a cushioning effect and so subjects can walk faster without risk of injury. However the type of shoe seems to have little effect on the linear velocity of the four joints detailed in this study or the angular displacement of the knee and this is consistent with findings from other studies (Hutchins et al. 2009; Nigg et al. 2006). Interestingly there was a clear variation in the ankle kinematics of shoes 1, 2 & 3 despite the similarity of their rocker soles. This difference is most likely due to differing midsole densities which provide different levels of support during the stance phase and thus influence the level of dorsi/plantar-flexion occurring.

From the results of this study it is feasible that lower leg muscles (gastrocnemius, tibialis anterior, etc.) may be more active during the stance phase as different ankle kinematics will require different muscle activation. However it seems that, above the ankle, shoe construction has little impact on gait kinematics and so the EMG activity is unlikely to differ significantly.  Any further study should focus on the EMG activity of the lower limbs and further quantify the effect of differing midsole densities on ankle kinematics.

gait analysis | Quintic Sports
WE USE COOKIES TO ENSURE THAT WE GIVE YOU THE BEST EXPERIENCE ON OUR WEBSITE. IF YOU CONTINUE TO USE THIS SITE YOU ACCEPT THE USE OF COOKIES.OKPRIVACY POLICY