The squat is one of the most frequently used exercises in the field of strength and conditioning and has biomechanical similarities to a wide range of sporting movements used by athletes (Schoenfeld, 2010). Previous research has looked into the effect that squat ability can have on performance and injury prevention (Escamilla et al., 2001). Ohkoshi et al. (1991) demonstrated beneficial use of the squat exercise during injury rehabilitation, in particular the knee, and it is now commonly believed that the squat can help to enhance athletic performance in various disciplines (Escamilla et al., 2001). Additional benefits may also be found in daily living as the squatting movement has close specificity to everyday tasks (Schoenfield, 2010).

Despite the associated benefits, if performed incorrectly the squat movement could have potentially damaging side effects on joint and bone structures in the body due to high loads being placed upon them (Sato et al., 2012). The National Strength and Conditioning Association (NSCA) developed a position statement regarding the squatting technique which suggested athletes should: 1) Descend in a controlled manor until the thigh segments reach a position at least parallel to the floor, 2) keep the shank segments as close to vertical as possible in order to reduce shear force in the knee joint and 3) keep the feet stationary and flat on the floor (Chandler & Stone, 1991).

The following case study aims to use a multi-camera set up as well as the Quintic Biomechanics v26 software to measure and analyse various joint/segment angles whilst performing squats in different conditions. The conditions were with trainers/barefoot and on a Bosu/the floor respectively.

Three male and three female participants, all recreational athletes, participated in this study. Four Quintic High Speed GigE cameras were set at 100fps to analyse anterior, posterior, left and right views. The side views measured trunk, thigh and shank segment angles, as well as the hip, knee and ankle joint angles. The front view measured knee displacement in the horizontal and vertical plane and the rear view measured the alpha/beta angles. A position was marked a set distance away from each camera to ensure standardised calibration (Figure 1). The space was calibrated for all views using the horizontal and vertical distances of a calibration stick (Figure2).

Five squats were analysed for each participant in the following conditions: Barefoot/Floor, Barefoot/Bosu, Trainers/Floor and Trainers/Bosu. Once all conditions were complete, the Quintic Biomechanics v26 software was used to digitise and subsequently measure the corresponding angles of each squat.

Before any angles were measured, the total number of frames for each squat was determined by the initial downward movement of the hip marker through to stationary. Maximum knee flexion, i.e. the bottom of the squat, was determined and labelled 50%. This enabled 25% and 75% to be calculated by finding the frame half way between 0% – 50% and 50% – 100% respectively (Figure 4). 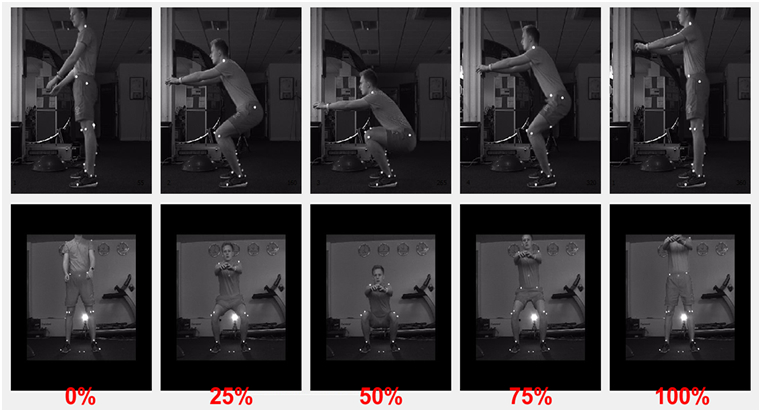 Front View
Single point digitisation was carried out to identify horizontal and vertical displacement of each knee throughout the movement. Multi-Linear Analysis was then undertaken in Quintic Biomechanics v26 software and exported to Microsoft Excel.

Alpha/Beta
The frame numbers calculated previously were used to measure the change in alpha/beta angles throughout the squatting movement. Beta angles were calculated by measuring the intersection between the two beta markers and the two alpha markers. Alpha angles were determined by measuring the angle between the two alpha markers relative to the vertical (Figure 5). 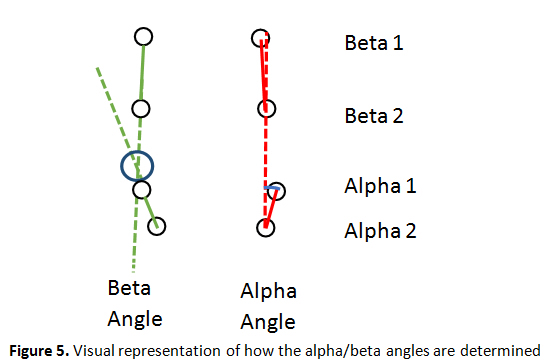 Side Views
The angles for the side views were measured at the bottom of the squat i.e. peak flexion. For each squat this frame was found and then used in the left and right side views. Figure 6 demonstrates where the angles were measured. 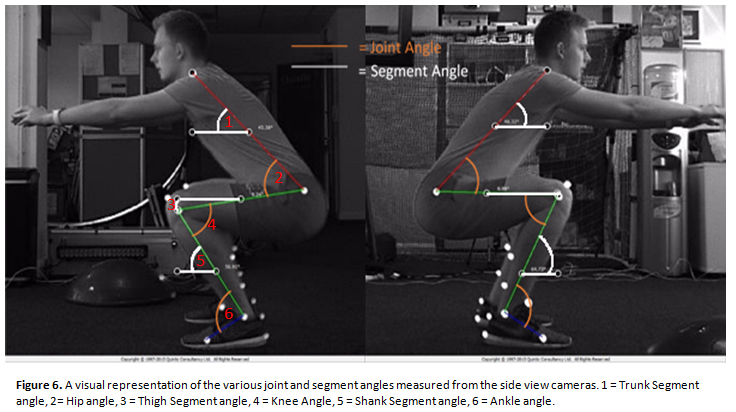 Results:
Participant’s results were collated in order to gain an insight in to technique, likelihood of injury and limb dominance across the various trials. 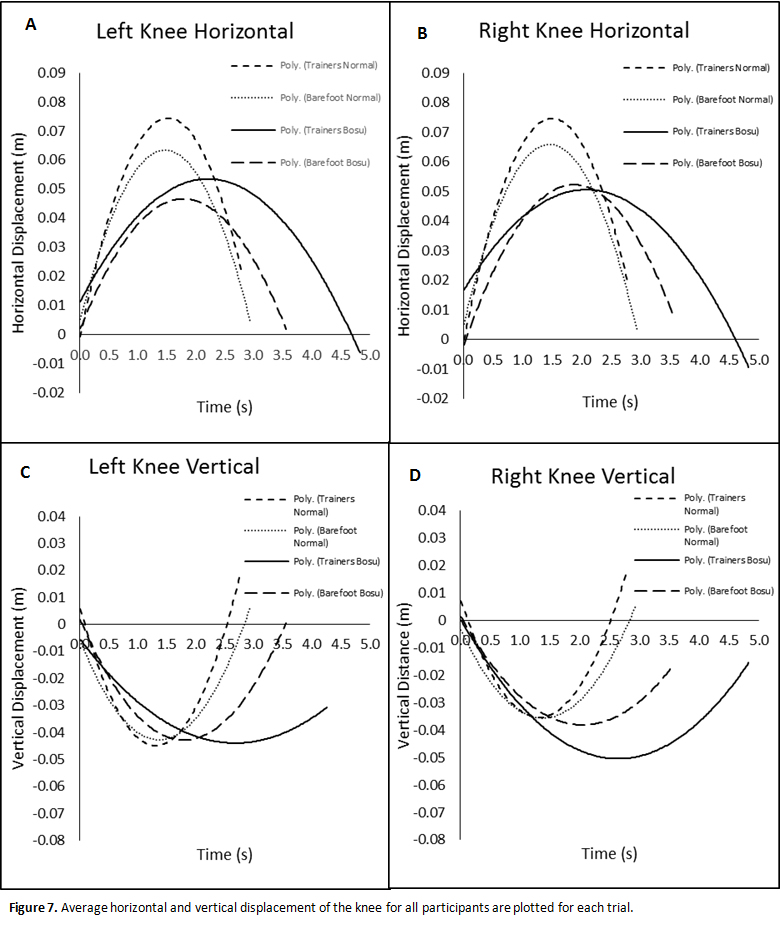 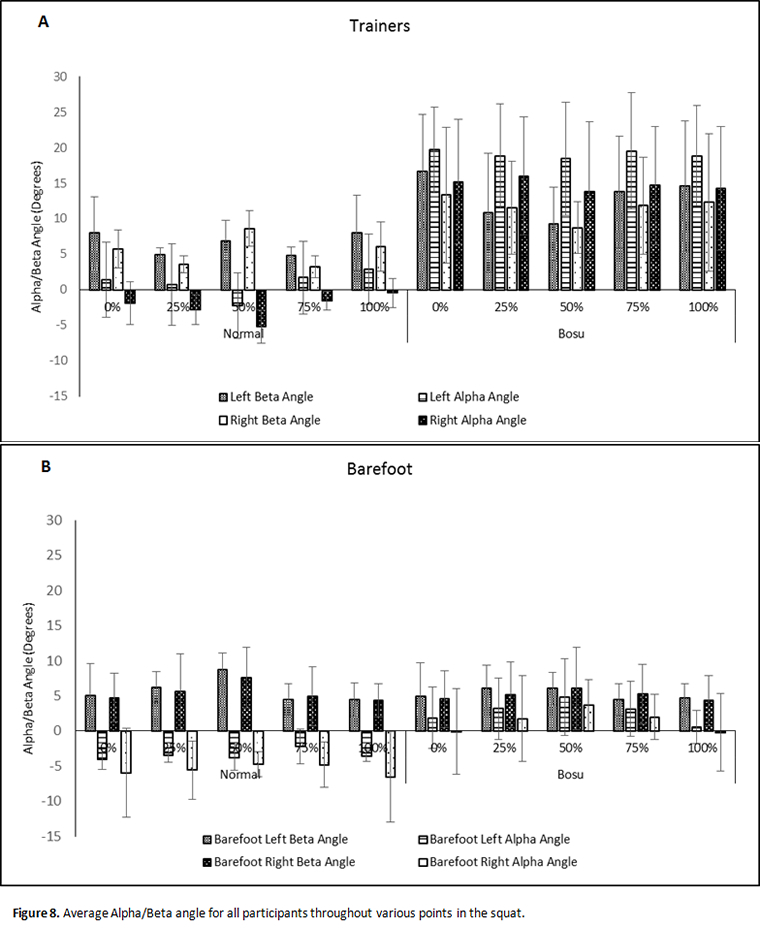 Side Views (Figure 9)
Footwear had little effect on the angles observed from the side views, however angular differences were observed between squats performed on the floor and the Bosu. The main variations found were: an increase in hip angle and an increase in thigh segment angle when squatting on the Bosu as opposed to the floor. Differences of approximately 10° were observed in these variables. Other angles exhibited small and inconsistent changes so it can be concluded that squatting on the Bosu had no effect on these. 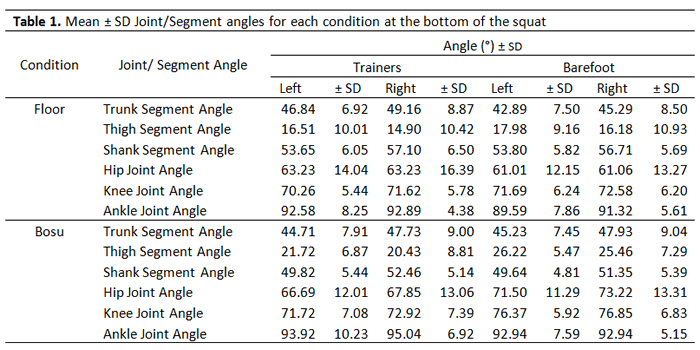 The results found highlight the differences between squats performed in variable conditions. The main points to consider were: an increase in thigh segment angle and hip angle when squatting on the Bosu, an increase in Alpha/Beta angles when squatting in trainers on the Bosu and greater horizontal knee displacement when squatting on the floor.  The following table helps to highlight the key anatomical landmarks of interest when performing a squat, along with the optimal technique. 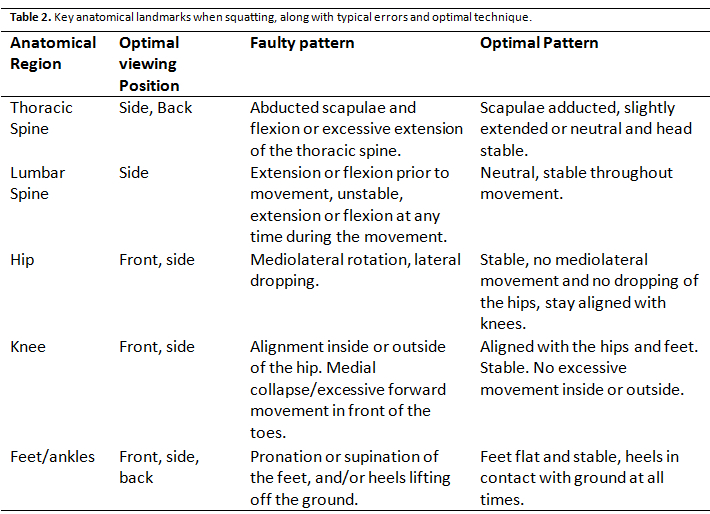 Firstly, it is clear that squatting on a Bosu (i.e. uneven surface), can have an impact upon various segment and joint angles throughout the body, in particular the thigh, shank and hip. For example, the increase in thigh and hip angles indicate that, when on the Bosu, squat depth was unable to be maintained. This is demonstrated in Figure 10. 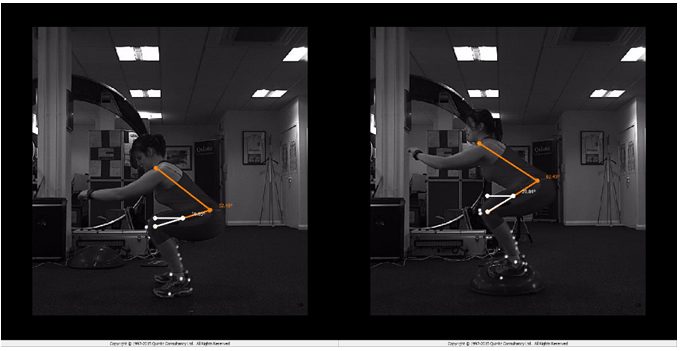 Schoenfeld (2010) argued that the inability to achieve a deep squat position could be due to: narrow foot placement, reduced joint flexion at the ankle, knee and hip, or intensity of the load. After looking in more detail at the squat stances from the front view, it can be concluded that participants did have a narrower foot placement when squatting on the Bosu (Table 2; Figure 11) which had an impact upon squat depth. Escamilla (2001) found that a narrow stance helped to reduce PCL tensile forces as well as tibiofemoral and patellofemoral compressive forces. Therefore, future studies could look to control stance width in order to gain a better comparison between squats performed on the floor and a variable condition and subsequent implications that this might have. For athletes looking to improve flexibility or stability at these joints, it might be beneficial to participate in squatting/stretching exercises in order to facilitate an increased range of motion at these joints. Worrel et al. (1994) & Handel et al. (1997) both showed that flexibility training helped to improve performance over a 3 and 8 week period respectively. However, further research is needed to investigate the long term effect of flexibility on strength and stability in the squat. Finally, if an athlete lacks hip mobility this can lead to forward motion of the trunk, which could place increased stress on the spine (Granata & England, 2003), especially at high intensity, however this was not tested in this study.

When looking at the front view, it is important to ensure that the knees remain stable. There was greater horizontal knee displacement when squatting on the floor as opposed to the Bosu; this was likely due to the wider stance in this condition. A wider stance can be preferable for athletes seeking to optimise development of the hip adductors (Markolf et al., 1990) and limit forward movement of the knees (Escamilla et al., 2001), whereas a narrow stance can help to develop the gastrocnemius and minimize patellofemoral/tibiofemoral compressive forces (Escamilla et al., 2001). When the knees medially or laterally rotate significantly, this can have a negative impact upon the tendons and ligaments surrounding the knee as they become more vulnerable to high forces (Kritz et al., 2009). Therefore, it is important for athletes to ensure that the knee angles follow the direction of the toes in order to minimise injury risk (Kritz et al., 2009). This is shown in figure 12. It is also important to note that total squat time took was increased by over 50% when performed on the Bosu compared to the floor. Hattin et al. (1989) found that in participants who performed a squat for 1 second and 2 seconds respectively, the faster squat significantly increased compressive forces at the knee. However, in this study minimum squat time was around 2 seconds and so a direct comparison cannot be made. Athletes should look to control the descent in order to help minimise any injury risk (Escamilla et al., 2001). 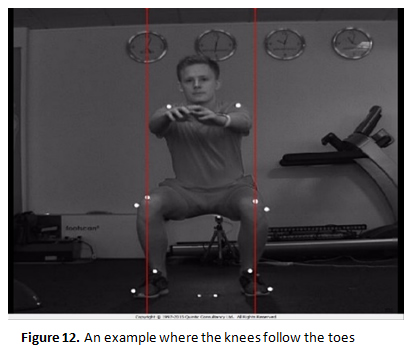 Although alpha/beta angles remained consistent on the flat surface and on the Bosu barefoot, when on the Bosu with trainers they were far less stable. The ankle complex contributes significantly to support and aids in power generation during squats (Hung & Gross, 1999). Normal range of motion about the subtalar joint is approximately 5° for eversion and inversion (Clarkson & Gilewich, 1999). Limited ankle mobility can often lead to the heels lifting off the floor and excessive foot pronation/supination, which has been described as anything outside of 5° (Clarkson & Gilewich). Squats performed with trainers on the Bosu reached between 15 to 20° which far exceeded the normal range as previously stated. This might leave participants particularly vulnerable to injury as the subtalar joint would be in a plantar flexed, inverted position (Baumhauer et al., 1995). However, Beynnon et al. (2002) found that anatomic foot type does not appear to be a risk factor for ankle injuries. Nevertheless, in order to maintain correct technique and reduce the likelihood of injury, athletes should look to avoid excessive pronation and supination of the ankle, therefore removing trainers when on an uneven surface could be beneficial.
Finally, literature has reported that athletes are advised not to wear trainers or running shoes when squatting as they do not provide enough support when pushing through the mid-foot/heel (Sato et al., 2012). This could be seen as a limiting factor of the current study. However, for use in practical environments where athletes are likely to perform squatting movements in trainers or equivalent, it does help to provide an insight into the angles of the foot which might aid with potential interventions that could be put into place. Another limitation of the study is that angles were only recorded at the bottom of the squat from the side and 0%, 25%, 50%, 75% and 100% from the back view. Although these attempted to identify the key elements of the squat, it would be beneficial to measure angles throughout the whole movement. Future studies could look to analyse angles at a greater number of points throughout the squat and determine the effect that other types of footwear might have on joint and segment angles when squatting on the Bosu or equivalent. Also, it may be beneficial for studies to control certain aspects of the squat. For example foot placement and squat depth should be monitored to ensure less variation.

Conclusion:
The results of the study suggest that squatting on an uneven surface can alter joint and segment angles to potentially damaging positions, however it can also act to control certain aspects. Squatting barefoot can help to minimise this and would be recommended in order to facilitate correct technique and reduce the chance of injury, although this can depend on the individual. Ultimately, correct technique should be followed by athletes/practitioners and utmost effort should be applied to ensure that injury risk is minimised when performing a squat, particularly when excessive force is being applied.

Quintic Squat | Quintic Sports
WE USE COOKIES TO ENSURE THAT WE GIVE YOU THE BEST EXPERIENCE ON OUR WEBSITE. IF YOU CONTINUE TO USE THIS SITE YOU ACCEPT THE USE OF COOKIES.OKPRIVACY POLICY