The videos have been digitised and calibrated using the Quintic software.

All the different velocities (linear, horizontal and vertical) from the four activities – bench press, long jump, golf putt and swimming, were analysed using single point digitisation. Every frame of the skill was digitised from the start of the movement until the end. 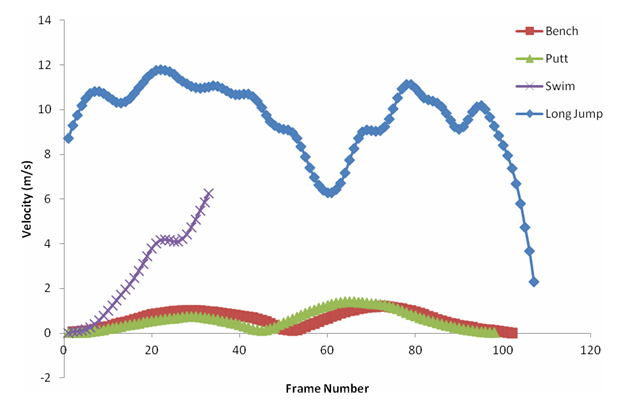 Graph 1 shows the linear velocities of the different sports. The greatest linear velocity occurred in the long jump, 11.79ms‾¹, followed by the swimmer with a velocity of 6.26 ms‾¹. The other two values had lower maximum linear velocity values, 1.2ms‾¹ and 1.42ms‾¹ for the barbell and golf club respectively. The reason for this can be seen when the velocity is broken down into the two components of horizontal and vertical velocity.

The golf club has one of the lowest linear velocities. In figure 1 below we look at the movement of the golf club. A small grid was drawn to outline the initial position of the golf  club (picture 1). As the video progresses to the top of the swing (picture 2) a blue line was draw. Using the initial grid and the blue line, we can see that at the top of the back swing the club has only lifted minimally, 0.06m, off the ground and horizontally has only moved a distance of 0.34m. A similar situation is seen at the end of the follow through (picture 4) with the club 0.07m above ground level and 0.29m away from initial position.

Graph 4 shows the final velocity component in the vertical axis. This graph offers more of a variation in the values. Again, the long jumper reaches the highest velocity value of 3.06ms‾¹. There is a constant variation initially because of the flexion of the knees and hips in preparation for the ‘push off’ stage of the long jump. As the jumper leaves the ground during the flight time of the jump, vertical velocity increases. The barbell initially has constant negative values because of the starting position. When the arms are fully extended the vertical velocity is zero therefore when the bench press is executed the barbell is moving downwards i.e. a negative direction, and as mentioned earlier if an object moves in a negative direction then it will have a negative velocity. At midpoint in the exercise, the velocity returns to zero as the barbell is not moving. When the arms are being extended, the velocity increases positively as it is travelling in the opposite direction. The golf club has negligible vertical velocity, 0.35ms‾¹, due to only a slight vertical movement of the golf club during the swing.

Taking a closer look at the long jump, from figure 4 and graph 5, we can see the hip movement during the jump. The red line in figure 4 represents the initial hip height (picture 1). We can see that as the video progresses (picture 2) the hip drops slightly below the line causing the depression in the vertical velocity values. Then as the athlete enters into the push off stage (picture 3) the hip returns to its initial height. During the flight time (picture 4), the hip rises above the line and the vertical velocity increases. Graph 5 displays this velocity also. The blue line represents zero velocity, and as the hip drops, the vertical velocity goes below zero.

The value that stands out most is the vertical velocity of the swimmer. If an object lands, or is caught, at precisely the same height from which it was projected then the final velocity of the object is exactly the same as the initial velocity with the only difference being that the direction is reversed i.e. its changed from a negative direction to a positive direction or the other way round. Therefore, it stands to reason that if the object is projected from a height and lands below the point of release that this will affect its final velocity. Firstly, it will result in a negative velocity as the object goes past the point of release and secondly it will lead to an increased velocity because the speed of the object progressively increases due to the force of gravity. Hence, in this case the final velocity is not equal to the initial velocity.

PoR = Point of Release. Represents the point where the swimmer continues in motion past the height where she dived from.

The pictures below show four different stages of the dive:

In conclusion, we can see from this analysis that velocity is a major part in an athlete’s technique. It tells us at what speed an object/person is moving at and in which direction. Being able to evaluate each of the components of velocity separately (horizontal and vertical), we can see in greater detail the effects that external forces have on our technique e.g. gravity, and use this information to our advantage to try and improve the execution of a skill.

The ability to calculate velocity is a very useful tool for coaches to have as it will allow them to have a deeper analysis of a performance and improve it. As for teachers, being able to apply the laws of kinematics to such videos as shown above will give students a clearer demonstration of the velocity mechanism. Being able to associate the laws of velocity with a visual aid (Quintic Video anlaysis software) will give students a better understanding in seeing how it applies to everyday life thus promoting better learning.

Velocity Sports Science Degree Physical Education | Quintic Sports
WE USE COOKIES TO ENSURE THAT WE GIVE YOU THE BEST EXPERIENCE ON OUR WEBSITE. IF YOU CONTINUE TO USE THIS SITE YOU ACCEPT THE USE OF COOKIES.OKPRIVACY POLICY