The subject was asked to cycle at a constant rate of 70RPM, at 6 different seat heights (4,6,8,9,10 and 12) marked out on the cycle ergo meter. 30 seconds of 100Hz video footage was taken per seat height. The video was calibrated using both a vertical and horizontal calibration measurement and automatically digitised. The data was then reduced to 3 complete leg cycles. (One complete cycle is defined as lowest vertical position of the toe, to lowest vertical position of the toe of the same foot on the next cyclic action). 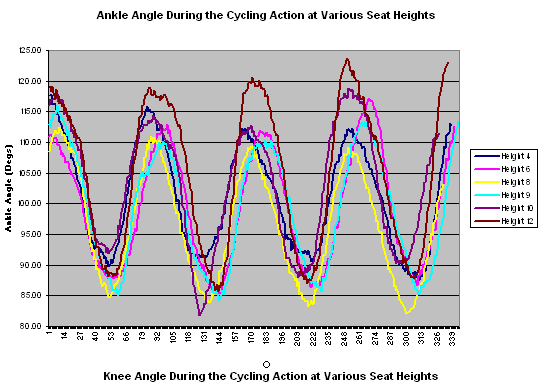 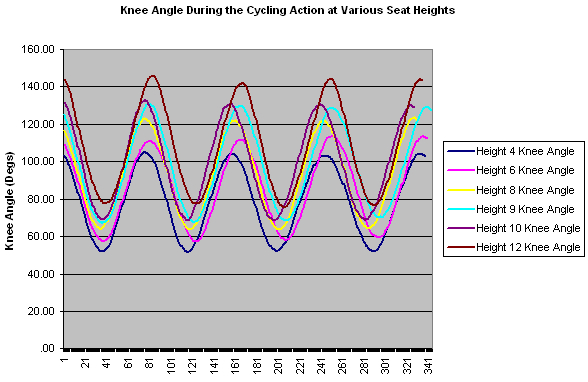 Table 1: shows the average values for Knee angles at TDC and BDC as well as the angular range of motion.

Table 2: shows the average values for Ankle angles at TDC and BDC as well as the angular range of motion

Although power output was not calculated during this exercise, it is widely recognised that seat height is also linked to power production. If the seat is to high, force transfer through the quadriceps and into the pedal crank is not efficient. If the seat is to low the active muscles are restricted so cannot extend to the optimal force generating length. Alteration of saddle height by only 4% can affect power output by approximately 5%, or 84 seconds on a 28-minute, 15 kilometres time trial. (Lucia et al, 2001)

Future studies could include using varying types of bike frame of set-up, to examine how much different frame set ups, such as racer, triathlon, trial or mountain bike effect the kinematic movements of the cyclist. Future studies could also include the collection of power data to see which frame geometries allow the rider to produce maximum power. A research program like this would allow an athlete to identify which bike set up is efficient for which type of race, whether the race demands explosive power, or strength endurance.

2) Method Frequency (rpm)
The same subject was asked to cycle at his preferred seat height (9) and cycle at 5 different rpm (60,70,80,90,and 100) for 30 seconds. 30 seconds of 100Hz video capture commenced once the subject had signalled that he had reached the designates work rate. The video was then calibrated using both a vertical and horizontal calibration measurement and automatically digitised. The data was then reduced to 3 complete leg cycles for ease of analysis. (One complete cycle is defined as lowest vertical position of the toe, to lowest vertical position of the toe of the same foot on the next cyclic action). 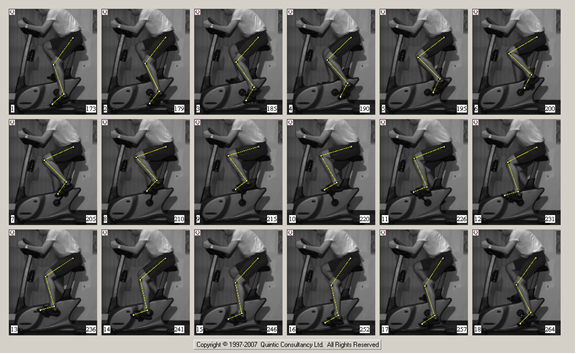 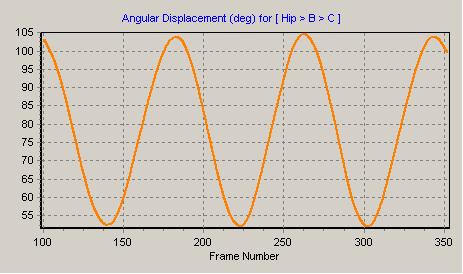 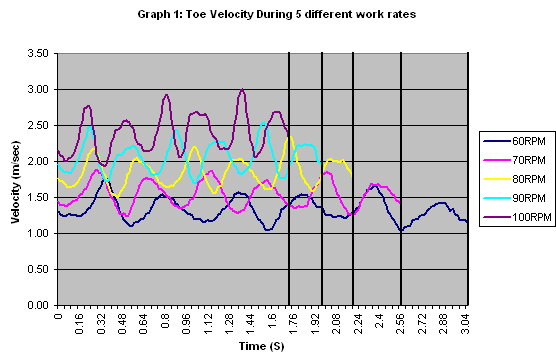 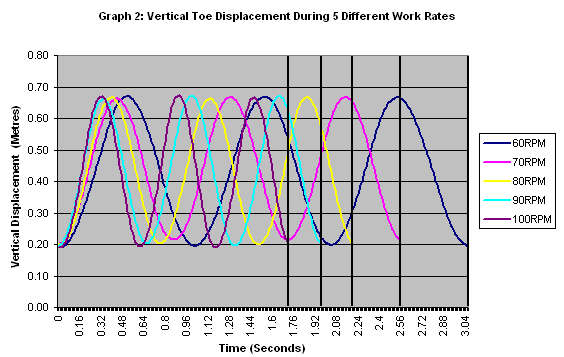 N.B The black lines on the graphs represent when each trial finished, as each trial was performed at a different rpm, the time to execute 3 complete revolutions was different. 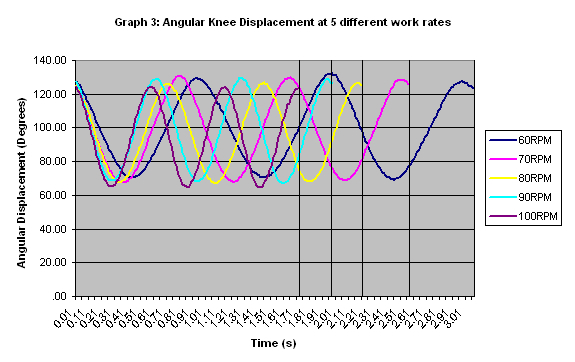 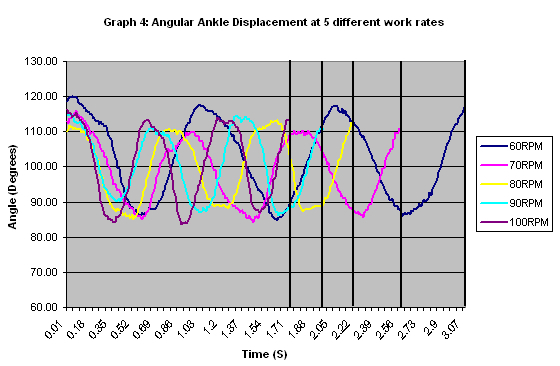 Analysis of the cycling action at the various workloads has demonstrated that as the work rate increases there are few technical changes in the subject’s technique. Graph 1 illustrates that as rpm increases, velocity of the toe also increases, this was expected as to increase the rpm the pedal has to complete more revolutions per minute which is achieved by the leg moving faster. Graph 2 shows that although the work rate increases the vertical displacement of the subjects toe stays constant, this again was expected as if vertical displacement increased, revolution time would also increase therefore causing rpm to decrease. During the 100RPM trial Graph 3 illustrates a noticeable decrease in knee extension near the BDC. Graph 4 also illustrates a significant decrease in ankle angle towards the BDC, as rpm increases.

To improve the accuracy of this study, the subjects optimal seat height could have been worked out as well as performing the trials on their current bike by using a turbo trainer set at a specific resistance. This would have allowed the subject to adopt their natural ride position. To improve this study further power readings could also have been calculated during the different workloads and seat heights. This would allow the subject to design a training program depending on whether they required power for short sprint events or muscle endurance for longer events.

Cycle Ergometer | Quintic Sports
WE USE COOKIES TO ENSURE THAT WE GIVE YOU THE BEST EXPERIENCE ON OUR WEBSITE. IF YOU CONTINUE TO USE THIS SITE YOU ACCEPT THE USE OF COOKIES.OKPRIVACY POLICY