Anterior Cruciate Ligament (ACL) injuries of the knee are one of the most common major injuries within sport, with incidence rates particularly high in multidirectional team sports (Moses et al., 2011). This is heavily influenced by the high number of deceleration and cutting movements involved in sports such as Football, Basketball and Rugby. Dynamic tests such as the single leg drop jump have recently become more popular for assessing joint stability (Fransz et al., 2015). Early detection of joint weakness and instability allow for prehabilitation and joint strengthening to occur, decreasing the risk of injury.

All the data was collected on a male (age = 24, weight = 90 kg, height = 181 cm), with no previous history of knee injury. The participant was an amateur football player who is predominantly right footed, therefore the left leg is their standing leg.

Reflective 19 mm 3D markers were placed on the left and right Anterior Superior Iliac Spine, Patella and Anterior Distal Tibia, as shown in Figure 1. All footage was recorded in a single session using a Quintic High Speed 1.3MP Camera and 4 – 11 mm zoom lens. The camera was recording at 250 frames per second with an image dimension of 1280×650. A Quintic infrared light was positioned behind the camera, serving to illuminate the reflective markers but not interfere with the participant. The camera was positioned 5 metres face on to the subject for all trials. The participant performed a total of 40 single leg drop jumps from a 40cm high box. The participant was instructed to take a single step forward with the selected leg and brace the full landing using just that leg. A total of 20 single leg drop jumps were performed on each leg, 10 of which were weighted, by holding a 4kg medicine ball close to the chest. The participant was given 30 seconds rest between each drop to minimise the effect of fatigue on performance. 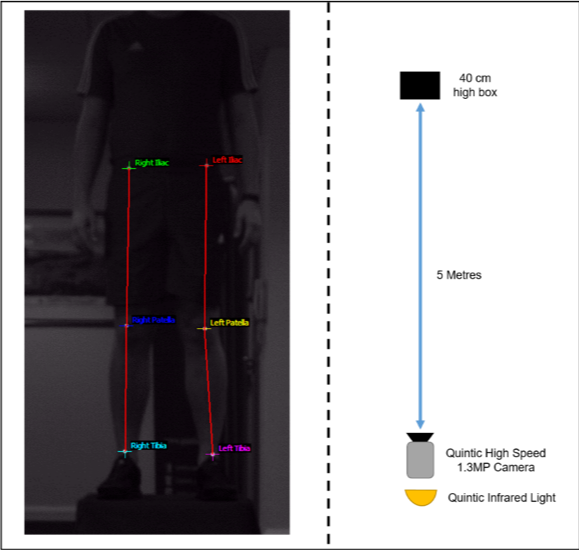 Figure 1. Visualisation of anatomical landmarks at which the 3D reflective markers were placed, alongside the positioning of the camera and lighting relative to the subject.

All videos were calibrated using a pre-recorded clip of a calibration wand being held at the landing position. The Automatic Tracking function within the Quintic Biomechanics Software was used to digitise all videos, using a self-created 3 point Automatic Tracking template. A time marker was created at foot impact for all 40 videos. This marker was then used to synchronise the digitised traces within the Multi Video Angular Analysis window.

Further analysis comparing left and right leg in the weighted and bodyweight conditions was completed using Microsoft Excel 2013. The amount of knee varus that occurred as a result of impact was taken as the difference between the angle at one frame before foot contact and the peak angle during loading. These angular differences were used to perform a paired T-test within Excel for both the weighted and bodyweight trials.

The frontal knee angle within this study was taken as the lateral angle of the Iliac, Patella and Distal Tibia markers. The first notable difference between the left and right leg, seen in Figure 2, is the starting frontal angle of the knee. The average starting frontal knee angle in the right leg was around 179°, whereas in the left leg it was seen to be slightly less straight at 176°. This small difference could be down to either marker positioning or the participant having a slight natural knee valgus position in the left leg.

As the knee began to take the load of landing, both knees began progressing into a greater level of knee varus. At 0.06 seconds (15 frames) into the loading, this varus movement appears to be briefly slowed and even slightly reversed. This could be down to either a buckling motion of the knee or marker “wobble” as the skin moves over the Patella, or even a combination of the two. After this slight interruption to the knee varus movement, it continued to increase up to a peak before returning to its starting position as loading decreases. Despite following very similar movement patterns throughout the course of the landing, the right leg consistently showed between three and five degrees more knee varus. 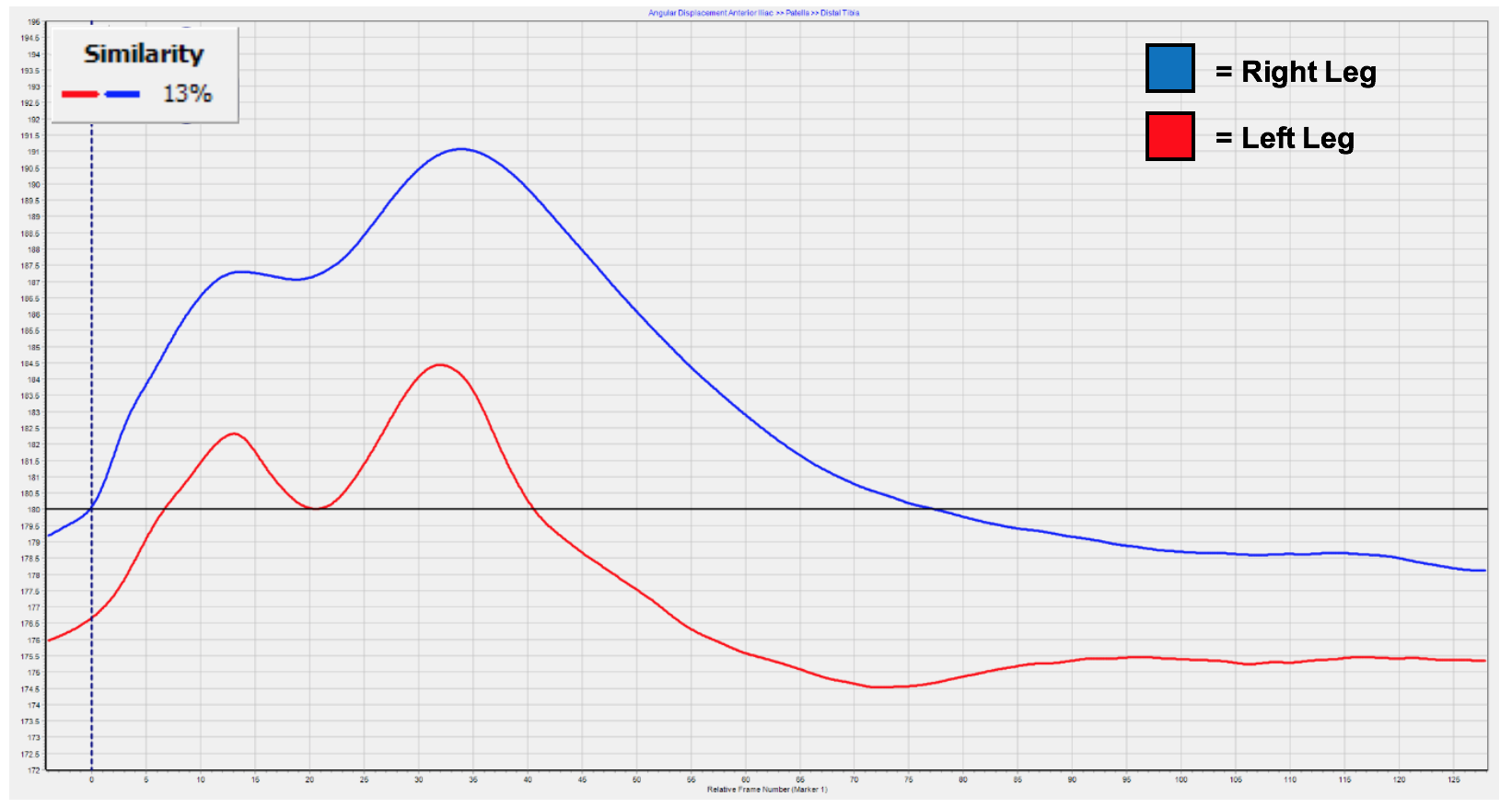 Figure 2. The average frontal knee angle (in degrees) during a single leg bodyweight drop jump – all data is synchronised at foot impact (dashed line). The blue line indicates the right leg and the red line indicates the left leg.

The weighted trial served to assess the volatility of the individual’s loading characteristics when put under a greater strain. Again as seen in Figure 3, the left and right knee appear to take up a slightly different starting position to each other. However, this starting position was consistent between the weighted and bodyweight trials; with the right leg starting with a neutral position and the left leg with a slight knee valgus. The average left frontal knee angle shown in red on Figure 3 suprisingly shows a smaller peak varus angle than that which was seen within the bodyweight trail. Both curves follow a similar pattern to that of the bodyweight trial and each other, with the “buckling” movement still seen around 0.06 seconds into loading. However the further continuation into the knee varus position in the right leg is greater within the weighted trial, reaching a peak two and a half degrees larger than that seen in the bodyweight trial. 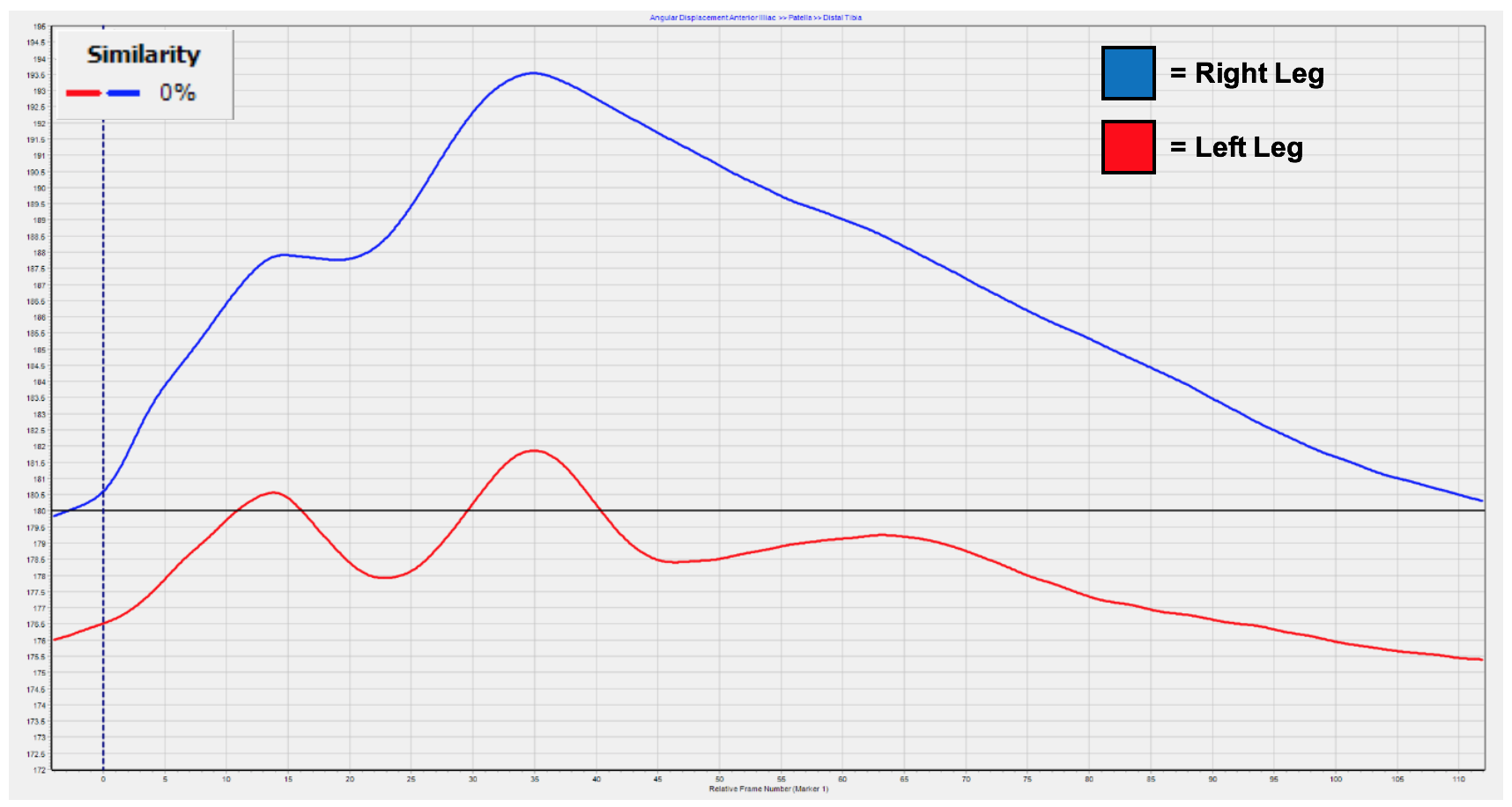 To minimise the influence of the starting frontal knee angle and to provide a typical statistical result, further analysis was completed using the largest change in frontal knee angle as a result of impact. These angles were then used to perform a paired T-test, comparing left and right leg in both the bodyweight and weighted trials, shown in Figures 4 and 5 respectively.

The right leg showed the greatest signs of instability in comparison to the left with additional weight increasing the level of knee varus under loading. The average peak frontal knee angle on the right leg was 11.7° and 14.0° in the bodyweight and weighted trials respectively. However these are both still lower than that identified by Russell et al. (2006), where the average peaked at 15.2°, within their male population of sample size 16.

2D video assessment has previously been shown to be both a reliable and valid measure of lower extremity data during a single leg drop jump (Munro et al., 2012). It would therefore be recommended that the participant completes right knee stability exercises and then repeats this testing, with the expectation to decrease their right knee varus on landing and consequently improve on their left to right leg Quintic Similarity score achieved in this study.

Drop Jump | Quintic Sports
WE USE COOKIES TO ENSURE THAT WE GIVE YOU THE BEST EXPERIENCE ON OUR WEBSITE. IF YOU CONTINUE TO USE THIS SITE YOU ACCEPT THE USE OF COOKIES.OKPRIVACY POLICY