The following project was carried out as a collaboration between High Performance Sport New Zealand (HPSNZ) and Yachting New Zealand (YNZ) to investigate some significant safety concerns over the use of equipment being used for the 2020 Olympic games.

In Olympic sailing there is, over time, a clear thrust to embrace the recent rise in the use of ‘foiling’ technologies to move the sport forwards. In the first example of this, which may well grow over subsequent Olympic cycles, the Nacra class catamaran has been updated for the 2020 cycle to move to a foiling design. Fig. 1 below shows this design in action on the water. 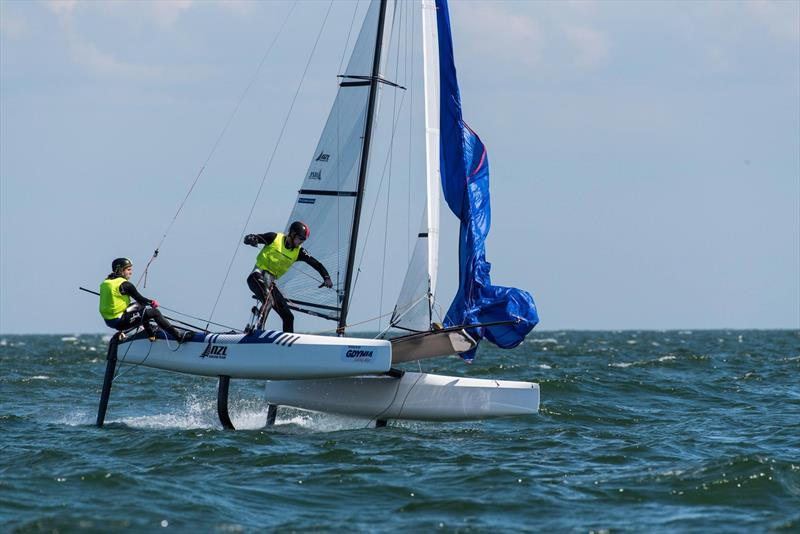 The change in design required adding a lifting element to the rudder at the back of the boat. This was done by using what is known as a T-foil design, which can be seen in Fig. 2 when the boat is inverted. 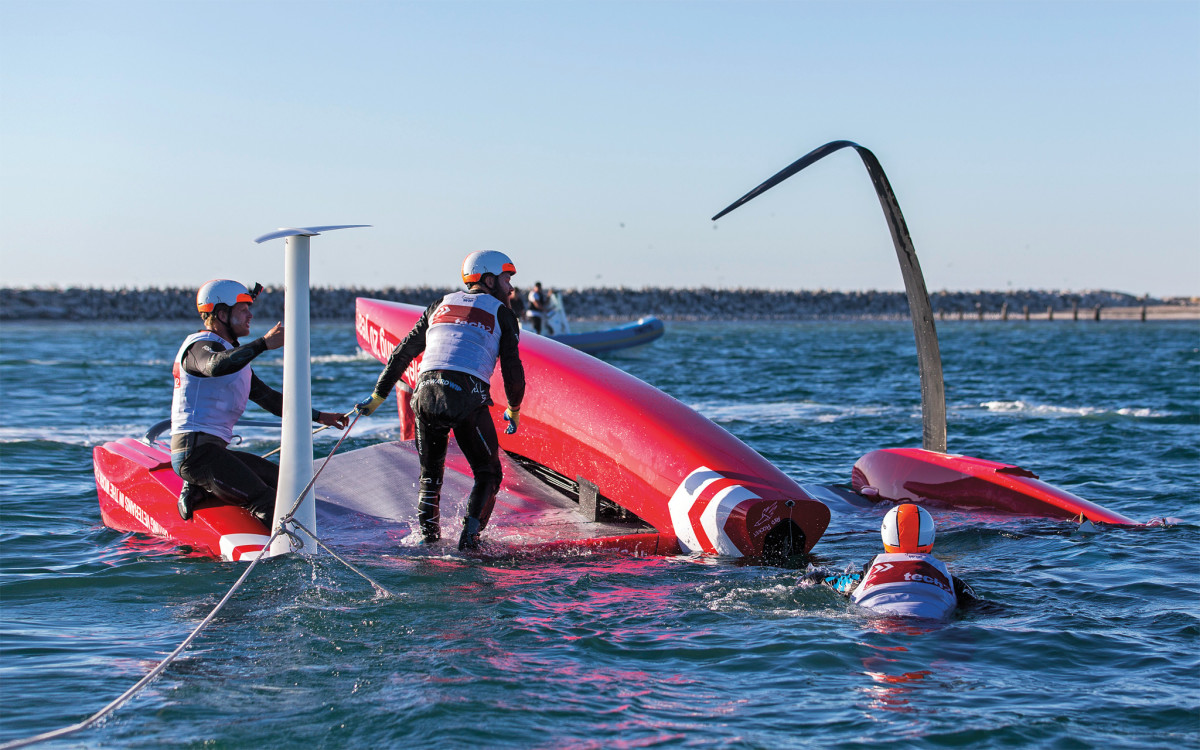 Over time it has become clear how this has significantly increased the risk of injury to the athlete. A typical injury mechanism is simply that of an athlete falling off the boat, into the water, being slowed by the drag of the water and being struck by the horizontal lifting element of the rudder as the boat passes.

In this case study we will briefly show some of the work done by YNZ and, HPSNZ using Quintic during some impact testing to ensure consistency of tests and review impact mechanisms. The benefit of these tests was to increase understanding of the situation and have an objective real world-based method to select materials for protective clothing for NZ athletes.

To perform the tests a ‘test leg’ was designed and constructed, using ballistics gel as a flesh substitute and glass reinforced plastic to approximate the tibia. The test leg was then allowed to move freely through water upon impact.

A test rig was constructed that held the lifting element from a Nacra rudder and dropped it repeatedly from height to the same impact location. The impact speed was typically at 9.4 m/s which, through modelling, was estimated to be equivalent to an impact from a sailor entering the water when their boat was travelling in excess of 20 knots. This is a common speed to be achieved in racing and hence was selected as both practical and representative.

Using Quintic in this application gave us not only a measure of speed, but also (given the fact the video is synched to the data) a visual check on where this speed had occurred through the impact. This was achieved in near real time during testing using a single automatically tracked marker on the dropping rudder element, which can be seen in some of the photos overleaf.

The benefit of this approach was to allow review of this key metric of the test while the equipment was being re-set for the next test. Thus, any poor tests could be flagged and repeated as required.

A typical speed trace is shown below in figure 3.

Two damage mechanisms were investigated – essentially to replicate a glancing slice from the relatively sharp leading edge of the lifting element and a full-blown impact. The clothing impact work was mainly concerned with the slicing action and the full impact was used mainly to feedback to the class committee around the risks involved.

In Figures 4 and 5 below examples of the two different tests are shown. The results of the slicing tests were taken and used to select the material for construction of our safety equipment for the sailors this cycle and the full impact tests strengthened YNZ communications to the class around these concerns. It is now likely the design will change post Tokyo 2020 Olympics. 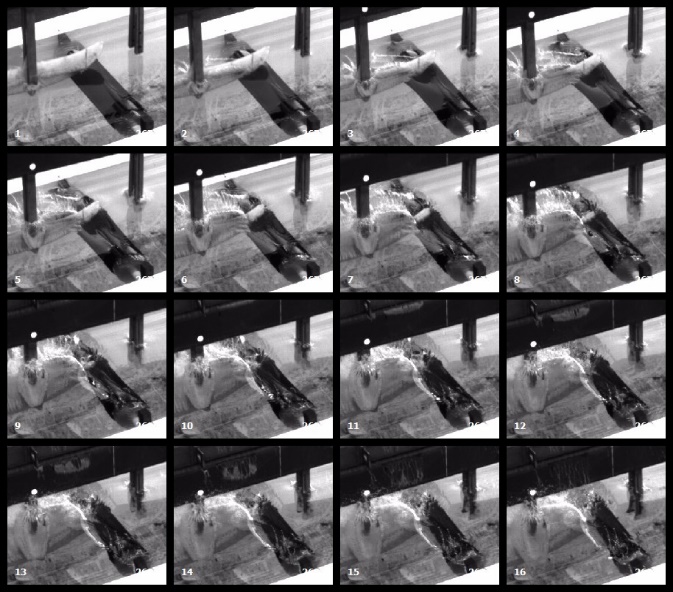 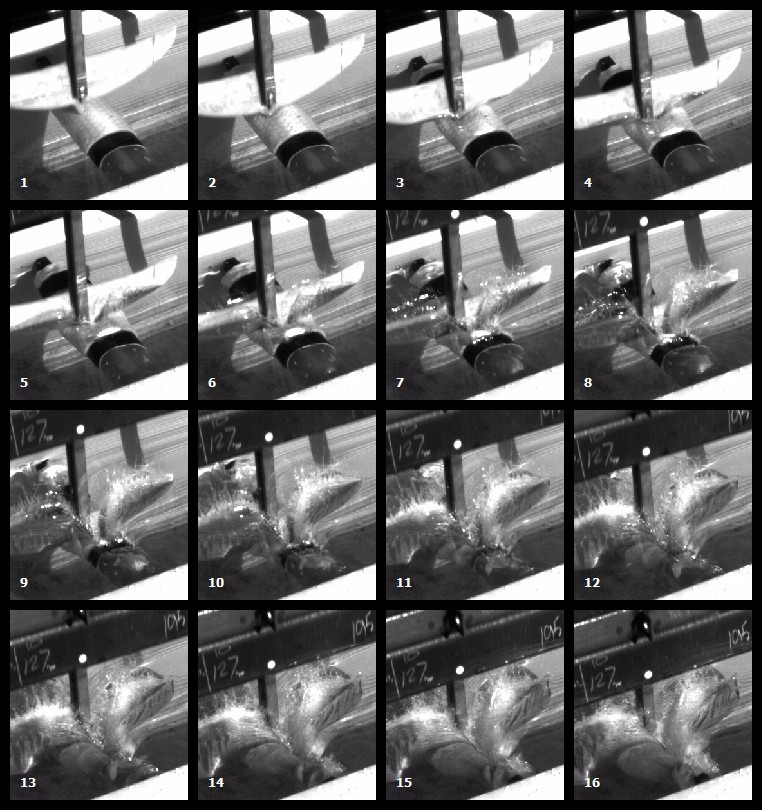 High Performance Sport New Zealand – Sailing Safety | Quintic Sports
WE USE COOKIES TO ENSURE THAT WE GIVE YOU THE BEST EXPERIENCE ON OUR WEBSITE. IF YOU CONTINUE TO USE THIS SITE YOU ACCEPT THE USE OF COOKIES.OKPRIVACY POLICY