Abstract:
This case report describes a patient with Parkinson’s disease who, frustrated by increasing falls, modified his footwear by applying an external forefoot sagittal plane wedge to elevate his toes off the ground. The patient claimed improved gait performance, and the authors sought to investigate the basis for these claims using tests of functional gait performance. Insight into the mechanism of action was also sought using PEDAR© (Novel Gmbh, Munich, Germany) in-shoe pressure analysis and Quintic © (Quintic Consultancy, Coventry, UK) gait analysis system. Performance against all functional tests suggested small improvements. For example, the ‘Timed up and go test’ changed from 15 seconds with nine steps without the modified footwear to 10 seconds with five steps with the modified footwear. PEDAR analysis suggests that this may originate from improved control of the centre of pressure, which is consistent with improvements suggested by Quintic.
These include a longer period of ground contact. Further research is warranted to investigate the role of this intervention in the management of gait dysfunction in Parkinson’s disease. 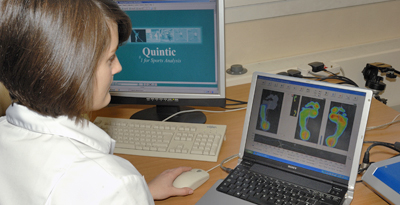 Mathieson | Quintic Sports
WE USE COOKIES TO ENSURE THAT WE GIVE YOU THE BEST EXPERIENCE ON OUR WEBSITE. IF YOU CONTINUE TO USE THIS SITE YOU ACCEPT THE USE OF COOKIES.OKPRIVACY POLICY