Newton’s cradle consists of 5 metal balls suspended by bifilaments, to keep the movement in one plane. Each ball is set up so that at rest each ball is in contact with an adjacent ball. When an end ball is taken out of rest and pulled away, and released it swings as a pendulum and hits the next ball. At contact with this ball the energy and momentum from the first ball is transmitted through the three balls at rest to the final ball on the other end. The transferred energy and momentum cause this ball to be propelled with the same velocity as the first ball. If two or more balls are pulled up and let go, the same number of balls will be propelled from the end of the resting balls.

Momentum is defined as Mass multiplied by velocity.

The Newton’s cradle was filmed at 100Hz for 30 seconds, with a number of different starting conditions. Each video was then calibrated and each ball automatically digitised. Butterworth filters were then applied to smooth the data. The mass of the ball was also measured so that P (Momentum) can be calculated. 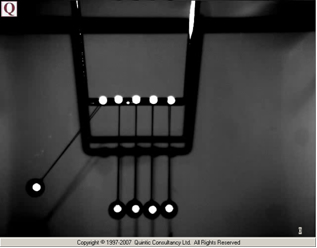 Figure 1: Experimental Set-up of the Newton’s Cradle during the 1 ball Trial. 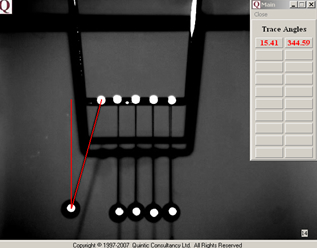 Figure 2: Angular displacement is calculated by measuring the angle to the
Vertical from the Ball Centre of Mass (COM) to Pivot 1 COM 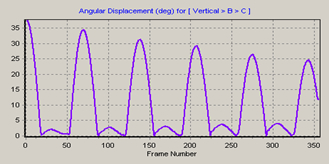 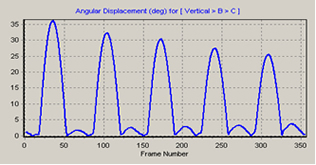 Trial one consisted of starting the pendulum by pulling ball one away from the resting pack and releasing it. The cradle was then filmed until movement had stopped.

Tables 1 and 2 show the angle of both ball 1 and 5 to the vertical, the velocity of both balls and their momentum during the first 2 swings. The highlighted figures in dark represent the point at which the moving ball strikes the static balls. During the first swing maximum momentum for ball one during its descent was 7.472, after making contact with the at rest balls, momentum and energy are transferred through the system causing ball 5 to move and reach a maximum momentum value of 7.515. Table 2 and figure 8 represent ball’s 5 descent back into the ‘at rest balls’ (swing 2). Table 2 shows that ball 5 reaches a maximum momentum of 7.47 at frame 51 before hitting the at rest balls, and ball 1 reaches maximum a momentum of 7.16 at frame 55. Figures 7 and 8 show the corresponding still frames.

Trial three consisted of starting the pendulum by pulling ball one, two and three away from the resting pack and releasing it. Please download pdf document for further details (Bottom of page):

Trial four consisted of starting the pendulum by pulling four balls away from the static and releasing them. Please download pdf document for further details (Bottom of page):

Table 6 illustrates the total momentum values through swing 1, trial 2. Peak momentum for the active balls occurs 5 frames before contact with the static balls with a value of 20.60, after contact with the static balls, momentum transfers through the system to ball 4 and 5. Balls 4 and 5 reach their peak momentum of 18.54 3 frames after balls 1 and 2 originally contacted the static pack. This trial demonstrated a 90% efficient transfer of momentum through the system.

Newton’s cradle also demonstrates conservation of energy; the Kinetic and potential energy of the balls can be calculated by using the following equation:

Vertical displacement of the ball is calculated by measuring the maximum height of the balls COM to a line that runs through the balls static COM. Point of maximum height and velocity were calculated by exporting the data, from Quintic Linear Analysis. The Gravitational constant was taken as 9.81, and the mass of the balls was measured as 0.022Kg. Appendix A shows the kinetic and potential energy of the five balls throughout the first pendulum swing. Graph 1 illustrates the tabular data from Appendix A.

Graph 1 also demonstrates that during the first swing the cradles total energy remains constant, throughout the downswing of ball 1 and the upswing of ball 5, demonstrating that conservation of energy took place and balls 11 energy was transferred through the static balls into ball 5. The graph does demonstrate a decrease in system total energy 3 / 4 frames before contact and 3 / 4 frames after contact this is due to a smoothing error in the data. If the experiment continued we would expect to see the same kinetic energy and potential energy relation ships, although kinetic potential and total system energy values would decrease due to the energy lost through heat sound and frictional forces. 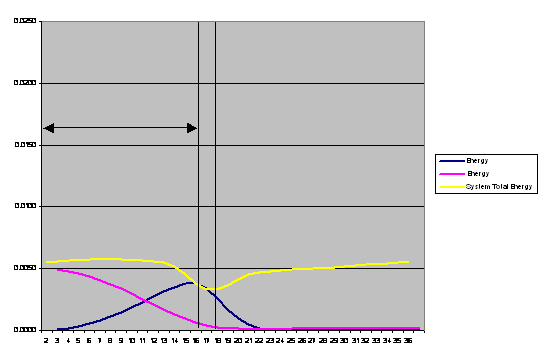 Future studies should investigate whether Newton’s cradle still demonstrates the laws of momentum and energy conservation if the following set-ups are used.

Newton’s Cradle Conservation of Momentum and Energy | Quintic Sports
WE USE COOKIES TO ENSURE THAT WE GIVE YOU THE BEST EXPERIENCE ON OUR WEBSITE. IF YOU CONTINUE TO USE THIS SITE YOU ACCEPT THE USE OF COOKIES.OKPRIVACY POLICY