The Effect of Smoothing on Lower Limb Linear and Angular Kinematics

When collecting biomechanical data of human movement, often reflective markers are attached to a subject on areas of interest (i.e bony landmarks).

Errors can still occur within the data collected due to:

Therefore, it is important to smooth the data, to remove any unwanted data frequencies.

Aim – The aim of this study is to highlight the effect of smoothing and different filter values on peak velocities and angles. 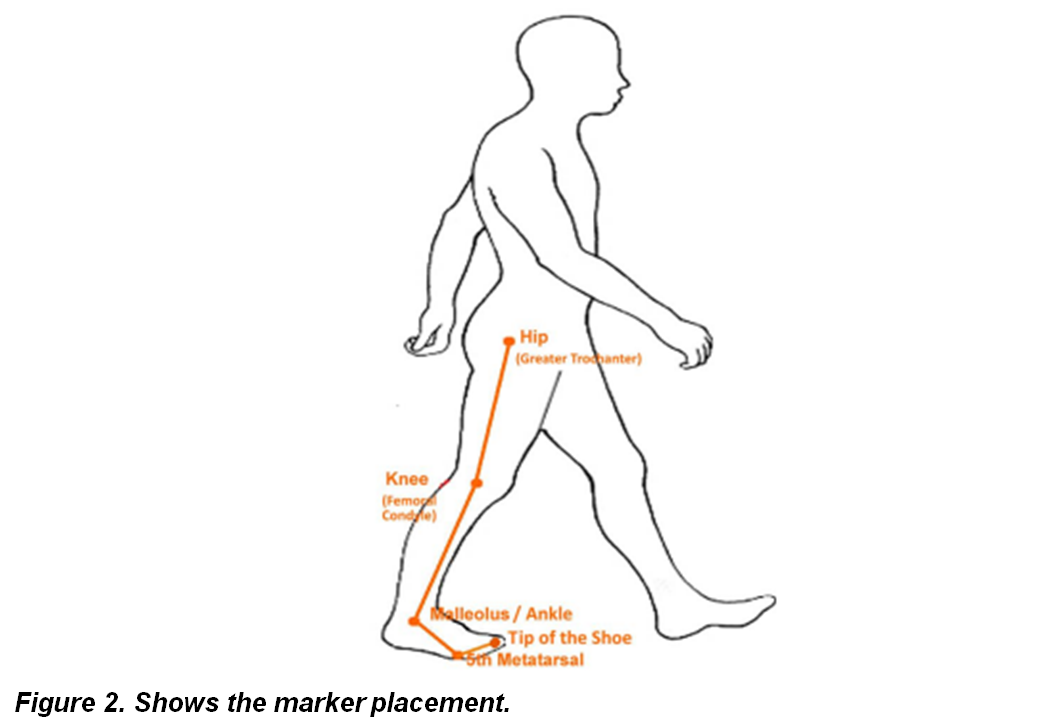 Automatic digitisation was used to measure linear and angular displacements, velocities and accelerations of the hip, knee and ankle.

Data filtering, shown in figure 3, was then used to smooth the data at 5 hz intervals starting from 1 Hz (most smoothed) up to 62 Hz (least smoothing) for both the x and y values independently. 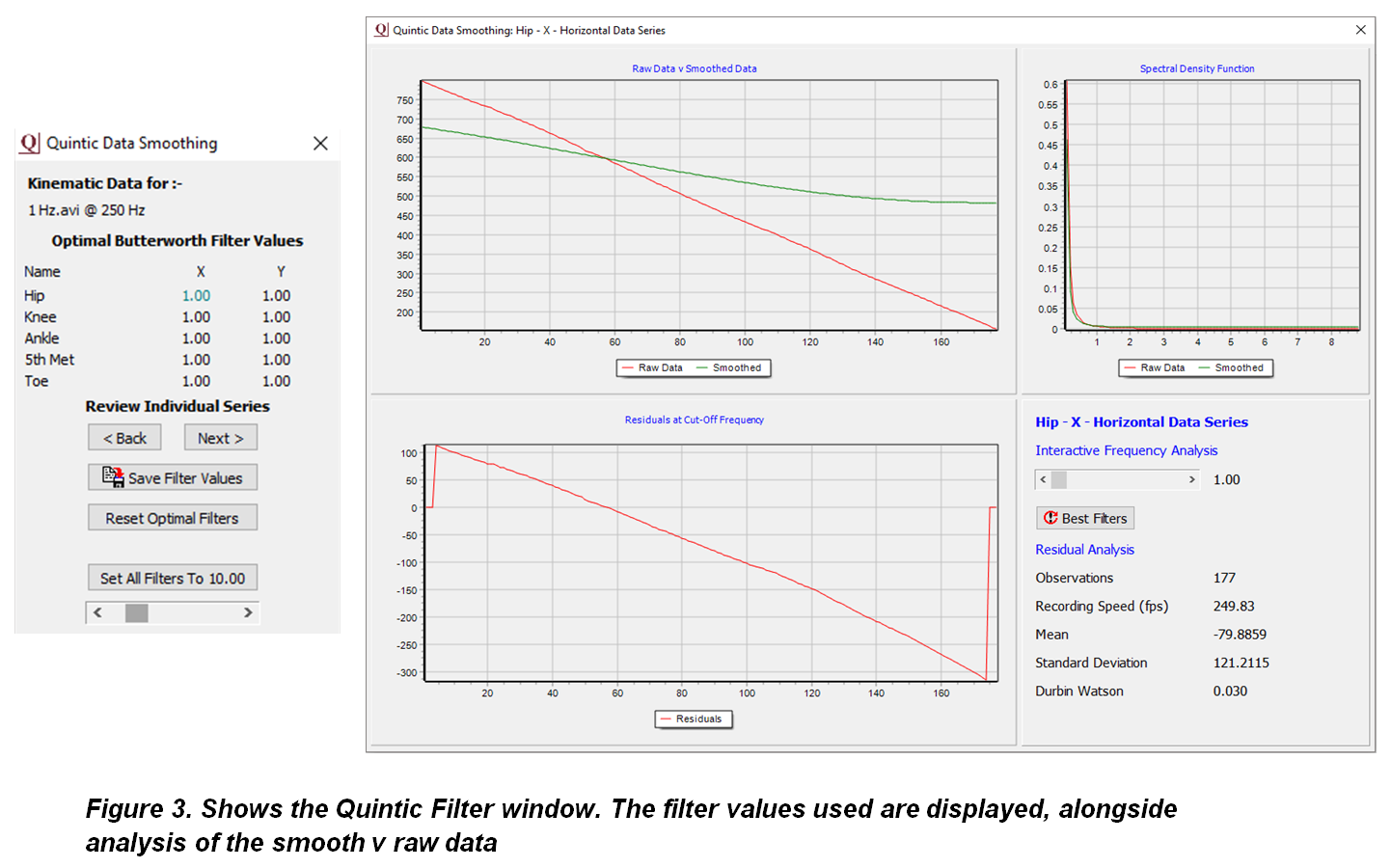 Smoothing was shown to have a greater effect on maximum velocity of the ankle (-85.9%) and the least effect on hip maximum angle (-9.1%).

As shown in Table 1, the effect of smoothing seemed to increase for both maximum velocity and maximum angle the further down the limb the measurements were recorded.

Table 1: Max Velocity, Max Angle and Min Angle difference between most smoothed (1 Hz) and least smoothed (62 Hz) data for the Hip, Knee and Ankle during the running stride.

Please see Appendix 1 for all of the data files.

As the range of movement increases, so does the effect of smoothing.

However, this is not the case for minimum angle as the knee showed the greatest effect of smoothing. 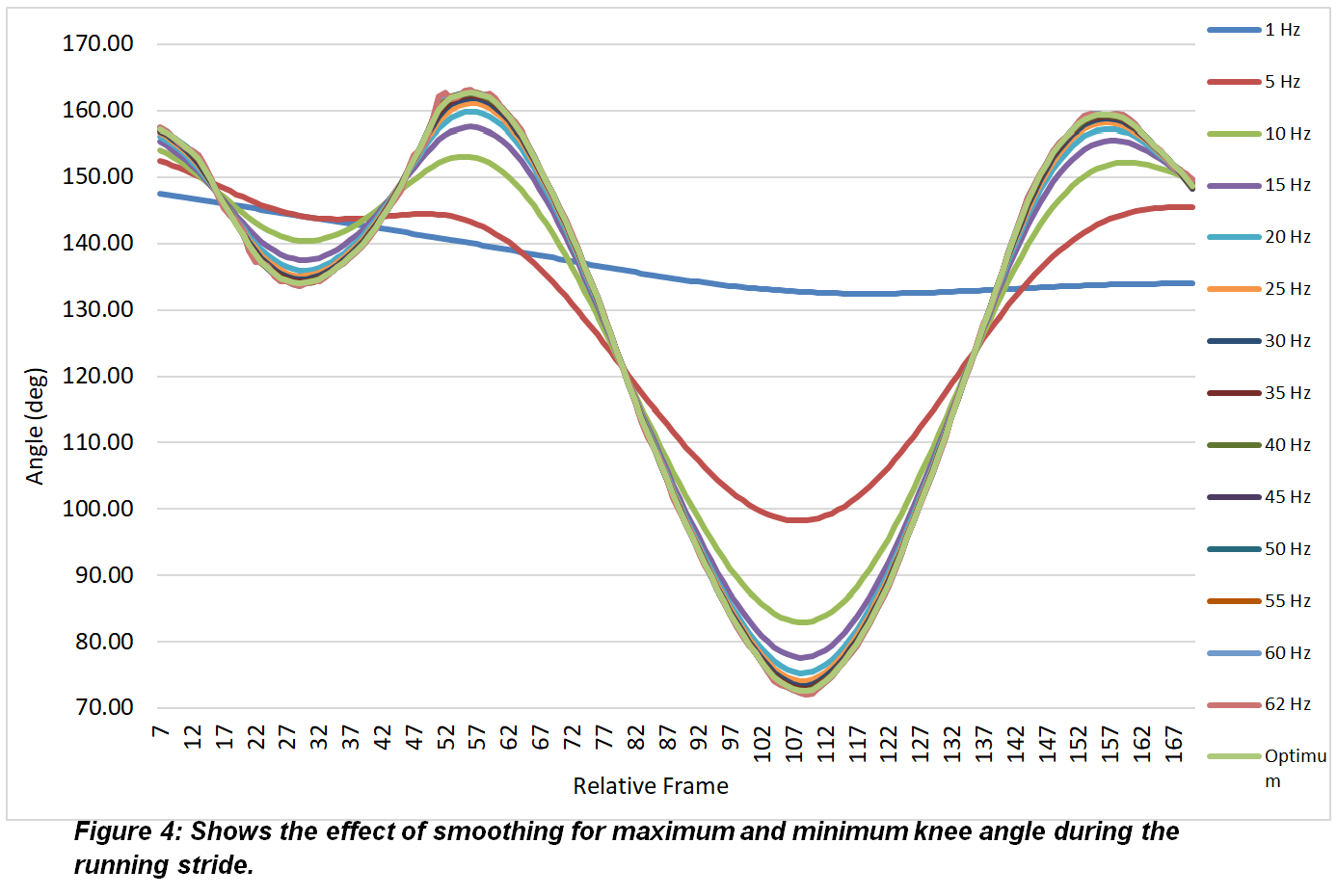 Results show that ‘one for all’ smoothing is not best practice for biomechanical movement analysis.

The amount of smoothing depends on the movement that is occurring and what the researcher is measuring.

Quintic Software is able to smooth each variable independently in the X and Y axis to ensure that ‘Optimum’ smoothing occurs and data is not over or under smoothed.

Conclusion – Biomechanists should use optimum smoothing to ensure data is represented appropriately. 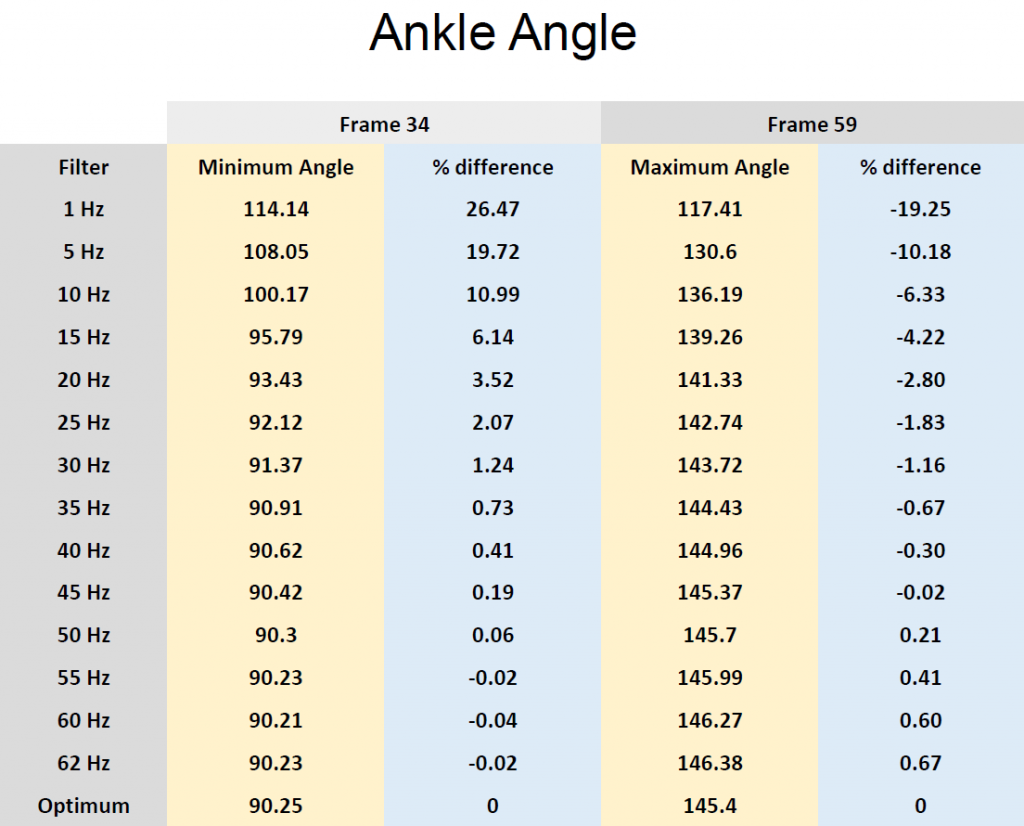 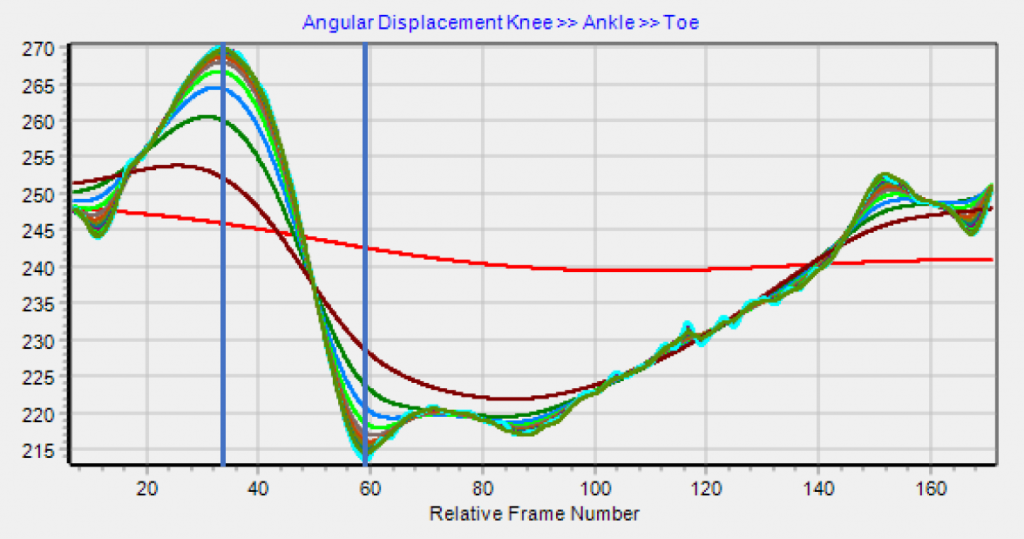 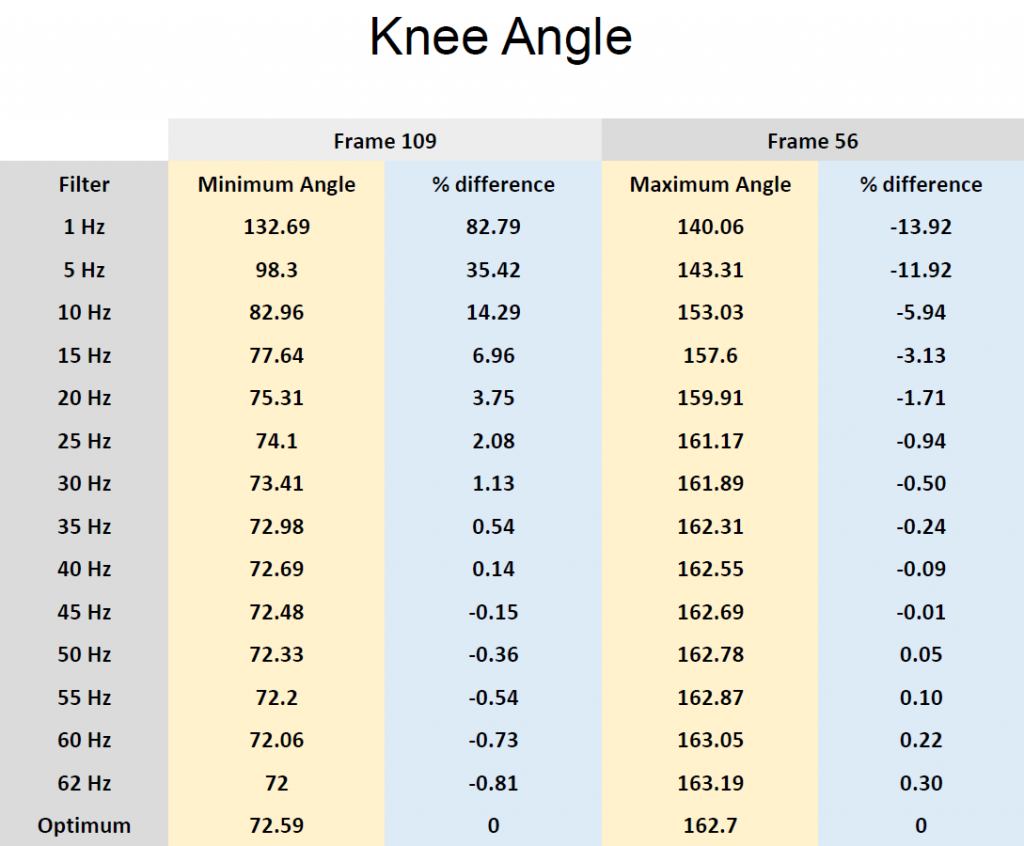 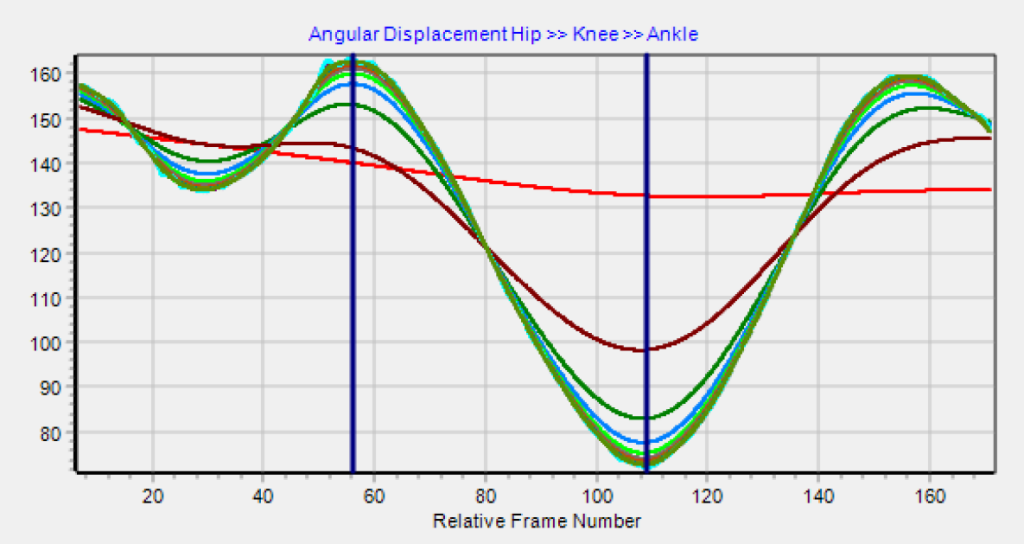 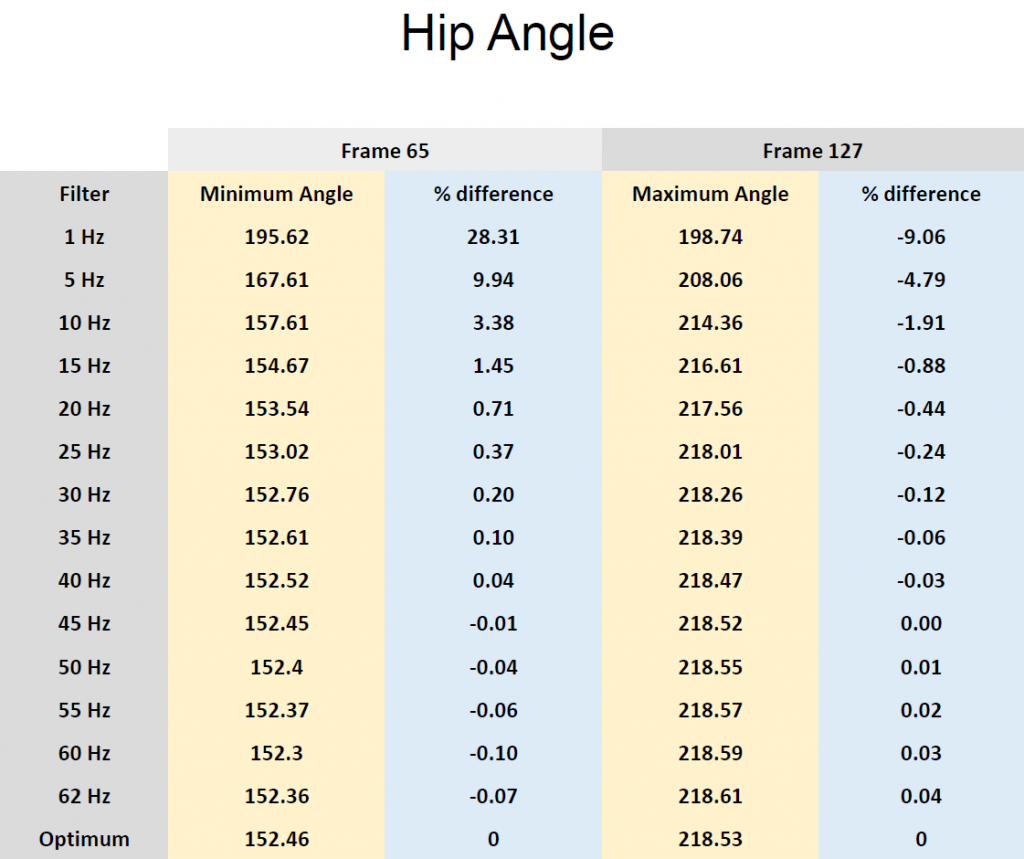 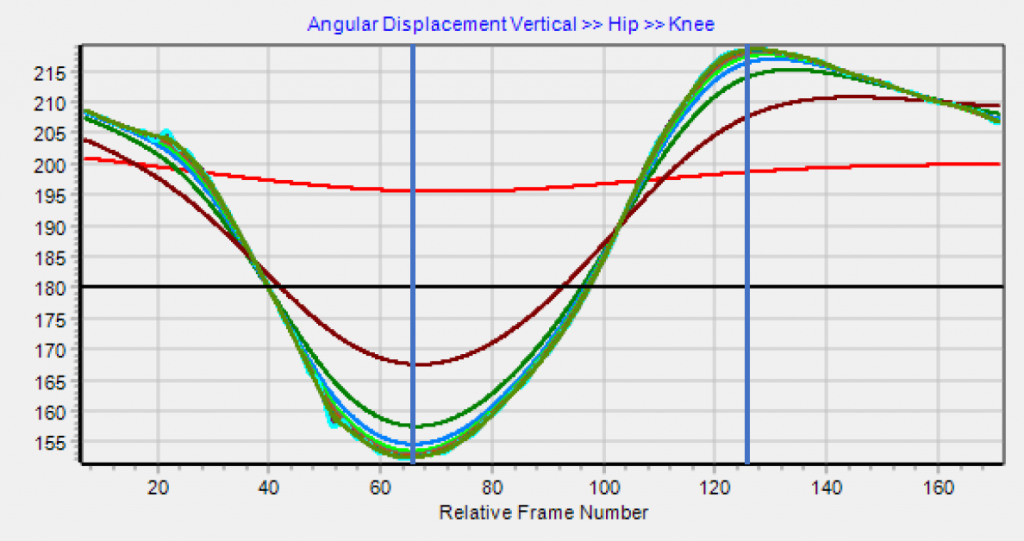 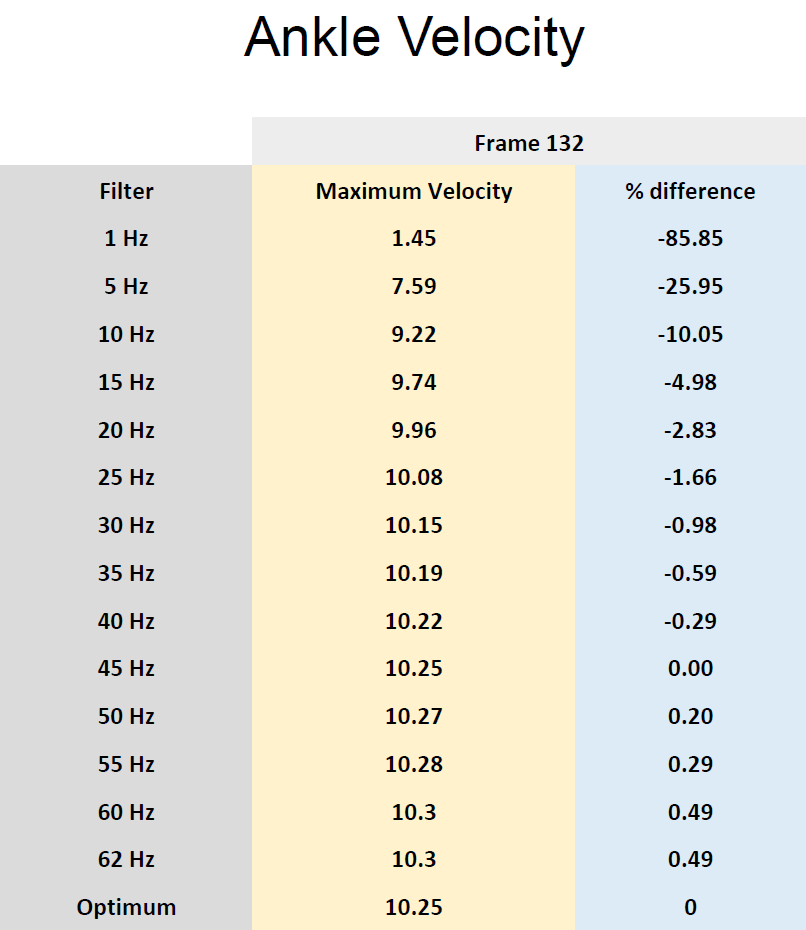 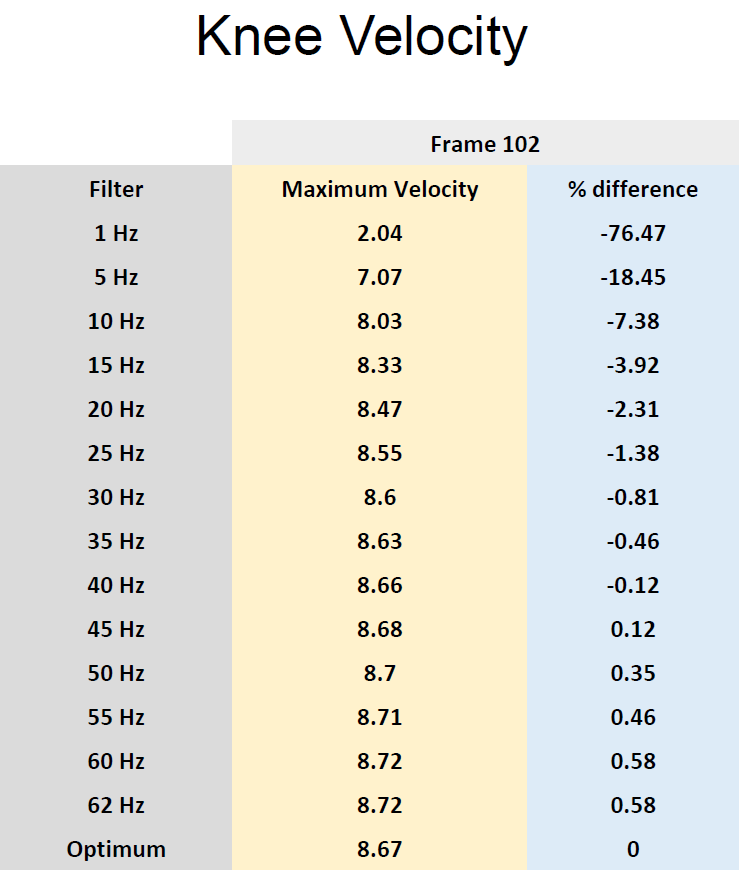 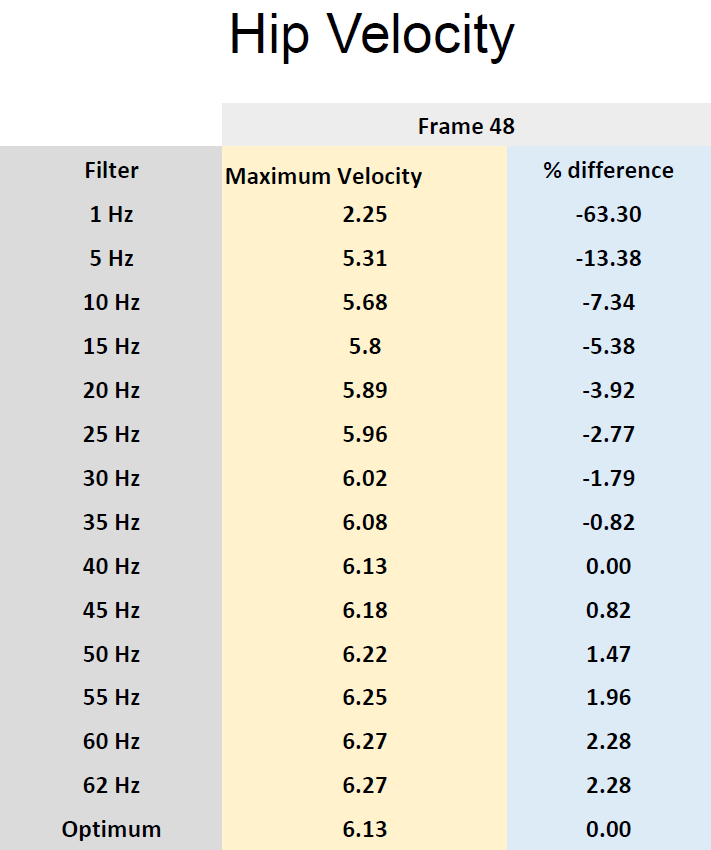 The Effect of Smoothing on Lower Limb Linear and Angular Kinematics | Quintic Sports
WE USE COOKIES TO ENSURE THAT WE GIVE YOU THE BEST EXPERIENCE ON OUR WEBSITE. IF YOU CONTINUE TO USE THIS SITE YOU ACCEPT THE USE OF COOKIES.OKPRIVACY POLICY